The Tiger's Tale: Earning Your Paws and the Meaning of Mahā

Tradition says that it falls to the rishi Vyaghrapada to gather orchids not yet tasted by bees for the purpose of making a perfect offering to the Great God Shiva.  Vyaghrapada was born for this greatness and yet makes himself greater still when, by the power of his tapas and his love for the Lord, he earns his tiger paws so that he can climb to the very top of the toxic tillai trees.  Deep in this impenetrable forest is where greatness itself protects greatness, at any cost.  The task of greatness has no end, no reason but itself, and calls us to embrace all that is great for its own sake.  Greatness means you earn your paws.

There are few words in Sanskrit more important than mahā, the “great.”  Grammatically, mahā is used in the familiar form as a prefix to nearly any and every word.  Conceptually it carries every sense of our contemporary use of “great” and “greatness,” which has its own likely proto-Indo-European root *ghreu.  These are very old words.  “Great” replaces the older English usage mickle, which takes us back circuitously to Sanskrit and the antecedent Vedic. 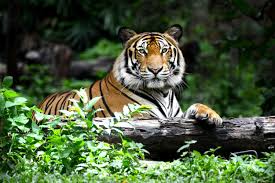 Mahā is derived from the Sanskrit verb /mah, which appears in the oldest works including Rg Veda, where in addition to the sense of magnify, esteem, honor, and revere, it carries other positive intimations: to rejoice, elate, and gladden.  The Sanskrit nominal weak form is mahat, the strong form is mahant, which help us too recognize cognate forms in Greek μεγάλος (megálos), the familiar Latin magnus, Old German michel, and eventually in English, “much” and other familiar words “magnify,” “magnificent,” and the rest.

But it is mahā- as a prefix that tells us something important about India.  There is mahādeva, a great god, and mahāsura, a great demon.  One can make a great vow (mahāvrata), live in a great place (mahārāstra), and be a great lord (maheśvara).  Perhaps, for we humans, the greatest of great matters is that we might ascend to the status of mahātma, a great soul.  Just what such greatness entails will depend upon who we ask.

Mahātman ---this is the root form--- may be a metaphysical claim, a description of moral character, or a marker of nearly any form of greatness a person might achieve or be recognized to be.   I can think of no other Indo-European language in which this prefix, this sense and sentiment is so ubiquitous.   In Sanskrit, great-something is indeed something that has never diminished in usage or in sensibility.  And this is the centerpiece of our concerns.

Everything about ancient India is described as mahā- and this larger than life, greater than great affectation is a fact and an aspiration, a description and prescription.  Dharma is not only virtue, religion, duty, righteousness, and law, it is mahā and so too it must be eternal, universal, expansive, and encyclopedic.  Just as much will be attributed to liberation, moksha, and those who are understood to have reached such a state: unconditional, certain, unequivocal, and genuine.  Such liberated beings have great powers (mahāsiddhi) that are similarly exalted.  To wit, whatever exaggeration we might find in such unconstrained embroidery, Indian culture regards as authentic and legitimate.

India loves greatness, and with it nearly any and all exaggerated attribution, in ways we find difficult to fathom and appreciate.  Ours is a culture reared on religious repentance, contrition, humility, even humiliation.  While we are no less inclined to aggrandizement and our forms of idolatry, especially in our culture’s theatre of spectacle, India has made an art of such elevation, homage, and ennoblement for as long as there has been India.

When the subject turns to government ---including the wiles of rulership, kings, warriors, spies, and the rest in Kautilya’s Arthaśāstra we will find no less commitment to all that is mahā.  The hyperbole transfers to the methods, means, and teachings of kings and rulers, and all of the ways a raja is a mahārāja.  To call these injunctions and recommendations extreme and often in directly, unambiguous violation of the greatness of Dharma is beyond dispute.  Machiavelli would blush at Kautilya’s art of governance by domination, corruption, and any means---that’s the mahā.

When we turn to matters of sex in the Kāmasūtra, there is a similar mahā, and that would apply as much to its endorsements of adultery, seduction, and just about anything that would enlarge, fantasize, and inflate possibilities.  That there is contradiction, incongruity, and discrepancy between all of these various mahā-s as applied to each subject is also mahā.   We should expect nothing less: every subject raises itself to the level of its own supremacy, its claim to greatness is that there is nothing beyond the claim it makes for itself.

Wherever we look there is mahā in India and this is what we should recognize as the defining judgment and commendation of cultural identity.  India has never shrunk from its claims to greatness, not then and certainly not now.  All things valuable by self-definition are mahā even if that means there are mahā-conflicts or negations.  Facts, history, contradictions, it matters not, everything is beholden to the Rule of Maha, everything that is true needs to be run through the algorithm that endows it with mahā.

So let us take up a few matters where mahā might cause us to think there is more consternation than composure, the kind that comes with maha-contradiction.  How is it that Dharma virtues and standards held to be inviolate, irreproachable, and immune are so wholly rejected, in mahā terms, by authoritative works on government like Arthaśāstra and sex like Kāmasūtra?

I submit two reasons how this kind of inconsistency is normal and what we might make of that.

First, India’s larger-than-lifeness, its commitment to mahā is itself sanctioned.  Mahatā, greatness, is the category that supplies permission and need only confirm itself: everything that is great neither diminishes nor intervenes in any other greatness.  For India this is normal, traditional, even routine.  Greatness is a convention that does not diminish any greatness but rather provides the standard required to represent the relationship between power and authority.

Second, and this, I think is the crucial point: India is a culture of radical affirmations.  We are as capable of virtue as we are of venality.  We are as good and as beholden to the Law (Dharma), to all of its prescribed virtues, as we also are within the terms of, say, the Arthaśāstra's truly diabolical machinations.  Dharma may intercede, claim authority and superiority but this is no more great than another’s greatness, be that the great words of a great sage or command of a great god or another realm of great knowledge, such as Government (Artha).

India has not succumbed to moral insouciance by admitting such multiple, contradictory great authorities.  On the contrary, I think what we see here is India’s deep, abiding sense of realism rather than fantasy.  We must do what we must do.  And in all such matters, no matter what it is that we take up and what we must do, we are charged to take the great course.  If our task is goodness, we are enjoined to great goodness and if it is liberation, then its own form of greatness.  And if we are thieves, gamblers, sinners, kings, whatever we are, we are adjured to be nothing less than great.  Like Vyaghrapada we manifest our own tiger paws to discover and offer the delicate orchid that is the gift we make of ourselves to greatness, at every cost.