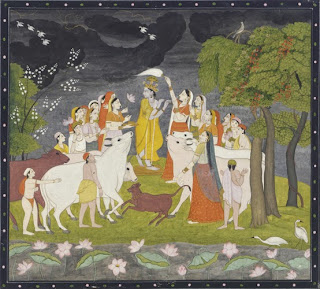 Game adds something dangerously more to the mix. Game pushes right up to and over the boundary of "fair" and raises the stakes of "cheat." And who ever said life was supposed to be fair was wishing for more than what is, and that's got plenty of game too.

As a kid I liked football a lot, actually managed to letter in high school by sheer dint of determination over talent (since I clearly had not enough talent). What was better than Joe Namath giving the Colts "game" in Super Bowl III (Roman Numbers Make It Seem More Important) and then winning it all? The Babe famously pointing to the fences. Ahhh, Reggie. I confess that the contemporary game of football no longer has interest for me but _gamesmanship_ is an interesting thing. What exactly is game? How does one draw the line between having game and, you know, moral boundaries? When is "cheating" cheating? Oh, and I remember Gaylord Perry's knuckleball too. Krsna at his best, I say. Trash talking is nothing new. Having game is something very, very old. Worth our consideration.

Any honest assessment of the great mythologies of India ---and by extension the ancient Indo-Europeans, like the Norse and Germanic myths---reveals the gods to have plenty of "game." Krsna's got game. Rudra has some serious game. Rama's game is, at least in Valmiki versions, to make playing-the-rules-is-game the game. Lila always trumps Dharma, if by Dharma we mean some sort of eternally applied standard that registers probity and the karmic consequences of behaviors "contrary" to Dharma. Lila means the world has game.

Game is when a situation creates an opportunity to use desire and interest for one's advantage (and _perhaps_ the advantage of others you care about.) Bias is part of everything we prefer or want. And why not? How else to know what it is you care for and about?  Lila puts the world in play and as players we are here to contrive our game, to figure out what game we have (and what we don't, say, my football career).  Lila reminds us that we are played, no matter what kind of players we choose to become.  Krsna too must die in the forest near Mahabharata's conclusion, mistaken as he is for...game.  No one gets a pass, not even the best players.

Every living thing in nature seeks its own advantage even when that means, on occasion, working towards the advantage of the larger phenotype (think: bees, ants). Humans may have selected out with aspects of altruism for their advantage, and there is some debate among evolutionary biologists about whether we pursue the collective over the individual. But since Dawkins' groundbreaking The Selfish Gene, the argument has been refocused because we know that pursuing more than selfish interest is a kind of interest. There's nothing special or exceptional about being human except the ways we work our interests---because like all other living things we seek fecundity, fidelity, and our advantage. We have called persons "saints" by virtue of their self-abnegation of their personal interests and we routinely proffer a transcendental exemption to God or gods by virtue of mystery or "higher" purpose. Think Job here. God gets to not play by our rules or meet our expectations, God gets game because God. Humans submit then and don't get the same game. That's pretty common, we'd have to agree.

When students of mine ask how Krsna (in Mahabharata and elsewhere) can be a "god" when he lies, cheats, misleads, rationalizes, seduces, murders, and _games_ the whole story---a friend you want and an enemy you must fear---I ask them why should god be any different than you are? How do we learn about ourselves from a god who is not like us? Drawing the line between gamesmanship and venality is no easy task, and why should it be? Are you puzzled that "cheating" is another human way of securing advantage? Morality doesn't get in the way of having game.  Rather, moral choices are another way of playing, another feature of our game.

Let's repeat the obvious: the gods and/or God (your game here) usually gets a pass. That is, there is the attribution of mystery, divine purpose, higher unknown goals, all ways of taking game from god(s). God is above human games is the usual meme. But not in every case, certainly not in all of these preChristian stories. But maybe, just maybe, gods have some really interesting game. You know, like the rest of us. The current tabloid game involves the money, the power, the industry of the NFL and its role in worldwide entertainment. I've no particular judgments here about the game of football or Mr Brady or the utter absurdity of this affair in light of other matters (he received a longer suspension and fine for gaming than for others in the industry who are spousal abusers?) or it's social "importance." Life is about having game. How you decide the stakes, the costs, the benefits, and the consequences: that is what matters. Choose wisely or have enough game that you can be Krsna. In our modern world that's no small game.


Here's a link to the story that prompted this reply. http://www.nytimes.com/2015/05/13/sports/football/in-tom-brady-mess-distinguishing-cheating-from-chicanery.html?_r=1
Posted by dbrk at 10:22 AM