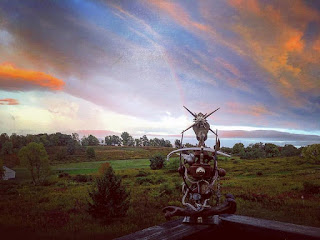 My spiritual life has everything to do with being a political person. I don't know how or want to live a life in which my responsibilities to family, community, and my own conscience are somehow separate or sequestered.  None of these "worldly concerns" are other than my spiritual life. Where to start? Life is a storm, I'm happy to start there. Who doesn't love the fair weather, the ease and beauty that also comes? Who doesn't love the sweet life and wish for more of it? Life brings it all. Let's go there.

Out there in my public life, I'm getting it again for being "negative." Meh. We all deal, we all cope, we all have our ways of addressing the mortal condition and our shared humanity. I'm not doing anything in my life to be popular, rich, and I do indeed have the luxury/privilege to say pretty much whatever I want because "the man" owns me a lot less than others. I get why people don't speak up or can't.  I get why people take a break, retreat, or check out.

Everyone does what she or he needs to do and if there is #0 Epic Truth, it's that: do the needful.  I have no complaint, grudge, or advice about how _you_ need to deal with events personal, political, or spiritual. But my own views are grounded in a great work that is hard to fathom because, like life, it is written as a riddle that is incomplete, digressive, and filled with contradictions.

More than any other historical or spiritual resource, the Mahabharata shapes my world. This is not a story about how great its going to be. It's the story of making success out of the horror you can expect and greatness from what you could not have anticipated. And here are a few epic points of departure.

One can be happily "negatively" motivated because,

(1) most positive motivating claims are basically wishful thinking that stand no chance in hell of coming true. Justice does not prevail, there is no arc to goodness, and people are just as capable of being venal as they are wonderful.
Epic Truth #1: The most likely possible things must be given priority to know what is coming next.

(2) being honest about how things actually work is a far better strategy for winning. You might still lose but it's vital to keep it real about your strengths, weaknesses, and your opponents. They may be detestable but you have to learn to think like them and with them to deal effectively. I'm all about winning because losing means those jackasses are in charge and that is far, far, far worse than our worst people. If you start with the acidic facts you can develop a strategy based on the truth rather than what you wish were true or some rosy picture scenario.
Epic Truth #2: Do not be a victim of principle when you can be a victor that changes the world incrementally for the better, even if that's not all you want or hope for.

(3) you are dealing with the real world where bad things will happen, best to be well-prepared, and give it your worst. This doesn't make you a "negative" person, it's not cynical, and it's not somehow "dark" or worse. Rather it's a way of dealing with a blind, pitiless, often meaningless world so that you can _make_ some meaning, create lots of happy, and manage to do lots of good. Keeping it real is often a darker than lighter task and, NO, it's not "all light" now or in the end.  If you need pink fluffy unicorns dancing on rainbows, we'll take care of you when that doesn't happen.
Epic Truth #3: Krsna means "dark" and refers to the color of storm clouds ---take his advice, prepare for what the world will do to you and you stand a chance to love life more and more.

(4) it's important to sell hopey hopey positivity because most people _need_ to feel this way just to deal.  Heaven? God knows all? Karma will balance the scales?  Have it your way.  This is why any  candidate, any successful public hero will bullshit us with how great or better it's going to be blah blah.  They are never all wrong anymore than they are all right.  Truth is, you can't sell laundry soap, cars, liberation, entrees on a menu, goodness, or just about anything without telling people it's great, it's going to be great, while you keep that happy face on.
Epic Truth #4: Lying in the service of deeper truths is why we need myths but a certain amount of dissimulation to reach far better outcomes is going to happen, needs to happen, and is part of the complexity of the deal. Make that deal carefully, with as much savvy as you can.

(5) humans are flawed, deeply flawed, being in politics requires some soul-selling and corruption just to survive, get used to it. The perfect really is the enemy of the good. Good people are far less than perfect. Now take the money, the ethical compromises, the humiliation, the vitriol, the criticism, and the heat it takes to be political, or to live a life in public, or even try to do some _good in the world_, and the outcome is complex and likely morally indefensible. Good deeds will be punished, good people make mistakes and do bad things. We're all accountable and we all need to make our judgments about the company we keep.
Epic Truth #5: Even Yudhisthira. No one gets a pass. He, the very best of us, did the very best he could, and so should we. But no one gets out alive. And even Yudhisthira failed, lied, and did things he regretted. So will you, so will the people you love. Keep good company.

My politics are my spirituality. Mahabharata is not a particularly popular text in Indian spirituality unless its innate conflict, real corruption, its lies and gambles, and above all its ethical compromise are utterly whitewashed. This is the usual interpretation because reality, well, that's a lot harder to take. But there is nothing else quite like it because the great epic invites us, like no other source, to love our humanity for _all_ that it is.
Posted by dbrk at 4:59 PM