It's 45 years now since Born to Run was released in 1975. Yeah, that matters to me but this isn't about that. Or is it?
This post is not likely going where we might think it's going. You may get bored. Writing these sentences last, it's also a mixed up muddled up shook up maelstrom of metaphors, more like curry in hurry than a carefully prepared word cuisine. Truth is, I woke up thinking and this mighty rad gumbo of ideas and mixed up metaphors was what was happn'n. 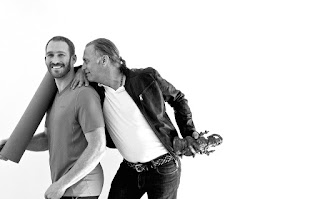 I went to India looking for the path to liberation and for someone to take me there. Though barely more than a teenager, I had read Buddhist sutra and Shankara's Advaita and I wanted to be in that game. I wanted to be able to engage those worlds on their terms and achieve their ends. I didn't realize how I was making the same mistake again.
As a kid I'd taken myself to church to hear what was supposed to be so important. And it was inasmuch as they were talking about the origins of meaning and how to create a life of goodness. It took awhile to figure out just how their versions of these vital human concerns were either another "who would think otherwise" matter or, far worse, a manipulation and exploitation that plays and cons you for their own purposes. So either we're talking about things that need to be beyond dispute---"love your neighbor"---or you are being handed a load of nonsense---"he died for your sins," "your reward will be great in heaven."
I didn't yet surmise that these same issues follow around _every_ religion or spiritual path, particularly in their corporate and institutional forms. When I went to India I was still looking but I thought they had the answers, in their traditions, that I could stand under their umbrella to withstand the consequences of all the rain.
Appa agreed to teach me the sources in the original and his traditionalism was my personal guarantee that I had found the guru. Who could not love this man at first sight? He wasn't seductive and there were no saffron robes or titles or claims but his authenticity was irrefutable, as much as his erudition and integrity. It was when he began to offer his own interpretations and critiques that everything started to change.