Come Dancing, But Leave Your Shoes

The festival of the great Dancing Śiva Natarāja is renown for its strange alchemy of ferocity and muliebrity.  Like the god himself, the people embody his tranquil rage and furious placidity.  They embrace the god’s lubricous virility and immoderate restraints.  He is, at once, beyond the pale of our mere humanness and the epitome of what we must become.  There is something so explicitly feminine about his greater complexion that one might think it an equally frank effort to conflate his masculinity.  But in fact this fusing and coalescence comes more effortlessly than we might foist upon him.  This is what we mean to explore here. 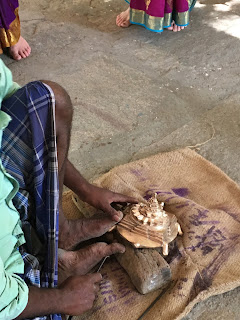 The fluidity of Natarāja's  movement is a deeper expression of a more natural, unassuming intelligence that represents a very particular view of nature, culture, and human experience.  It’s elasticity, animation, and vigor is neither insecure nor vacillating at its core.  There is a pliant anxiety and restlessness being affirmed in this capricious, fitful character that is mature, aggregated, and successful.

As a deeper exegesis of the mythology reveals, Natarāja loses none of his vulnerability and sacrifices none of his incorrectness to rise to this comely declaration of a whole being.  He is fragmented and stochastic in self-similarity but never splintered from the integration of the complete ensemble that makes the universe turn once and again.

Mythically, Natarāja will be fraught, as we are, with misjudgments, unforced errors, and unanticipated lapses.  But he will not lose one iota of his dignity or decorum, much less his cachet and sublimity.  While his contradictions are no less ours, the consistency and magnitude of their sheer range and inclusiveness gives them gravity and value.   When you come to see Natarāja  you come to see yourself for all of the awkward peril that entails.  Bring everything but your shoes to this dance, they stand between you and the power of the goddess who untethers all of the feelings he needs to invite you to dance too.

There is also something thoroughly Tamil about Natarāja  which means for all of us not born to Tamil culture that there is something at once utterly remote for its strangeness and alluring for the deep draft of its soundings.   Not everyone who comes to see Natarāja is Tamil ---the god surely appears in every corner of India--- but the culture of the Dancer’s labyrinthine mythic worlds is manifest in the entangled fusion of people and gods and culture.  The ascetic of the forest is entirely the same as that of the scrupulous anarchy of the temple, the garnished and sometimes absurdly gaudy street, and the greater cultural claim to be this god and his retinue.

At the great Cart Festival you are called to be vigilant for your safety, aware that the danger is real and an essential alloy in fashioning the composite of Natarāja s divine carriage.  This furious illusion of masculine potency, real as it is, is countered and commingled into the unalloyed femininity of Tamilness.  The god is made up, burnished and festooned with every kind of accessory, each appropriate to one gender, both, neither, and all.  It is a form of radical acquisition and occupancy where the character gets to live in every form he desires, willfully and subliminally.  All that is rational remains but is confected to defy any single identity.

The Śiva’s tandava, usually translated as his “dance,” is in fact a kind of possession, both personal, self-possession, and an extension woven into the fabric of being, into culture, and human interaction.  People come to see Natarāja for all of the beauty and the frenzy, for the rich protocols and precision of the rituals that comfort and express their love of the Dancer’s dactylic nobility and loftiness.  They come because they feel they have to, that something urgent beseeches the heart to be a part of this…this tandava.

The unmistakable, physically palpable gentility of Tamilness is the deep undercurrent that flows within this well-fermented apoplexy, contained as it is in the image of Natarāja’s bedizened tandava.  For the uninitiated, the enormity of the crowd and the cart on which he rides, the sheer excess of his mantle and the ceaseless plentitude with which he is being swaddled, belies the familiar image of the tiger-skinned, ash-strewn, serpentine eremitic yogin.  But in true Tamilness, the misanthropic recluse of supernal self-restraint is no less the copiously palatial, baroquely elegant, sometimes jaunty ingénue.  He is the picture of commingled codes in which gender becomes curvilinear and a sinuous sensuality rewrites what is otherwise outlawed or repressed.

These collisions with sexuality and entangled contradictions are the very heart of paradox embraced as the truest, more resilient paradigm for a life well lived.  We are both, we are neither, we are something more, and it is in the unfinished process that demands we take up the broken, missing, and extra pieces of our selves.  The Sanskrit word for this is sammelana, which means "commingled."  But the phenomena we are trying to describe is more demanding any one word could encompass.  The diffident, self-constrained, and taciturn god is also clamorous, ostentatious, and importunate.

From this infiltration of the unconscious into configured, patterned contours we can create a society that can contest with itself without destroying its shared provenance.  Tamils have been doing this for centuries and we could stand to learn something from these archetypes that affirm human dignity and represent the divine in ways that both defy and assuage our explicit expectations and sublimated needs.

Life’s disquieting facts cannot be so easily mollified or addressed by claiming that every problem can be solved, much less that every provocative difference can be quelled or controlled.  We are going to have to learn to live with differences as intrinsically antithetic as they are beguiling and inevitable.  Natarāja is a south-facing god within the architecture of consciousness and the living temple, which means that he is primarily a teacher.  What there is to learn depends on how far we are willing to go into the fathomless possibilities obscured and revealed in human experience.