Who Are These People? And Who am I? Thinking About Imagination and Empathy

One of the more humanizing and presumptuous features of being human is that you might have the audacity to imagine a life you are not living and will never lead. This is actually what the "humanities" are really about though that might nowadays be a step too far. It's quite out of vogue these days because the academic crowd that dominates the discourse thinks that we're no longer allowed to imagine or to presume. There not wholly off the mark. After all, do I ever have _your_ experience? But if we fail to imagine, I say, that's far worse. 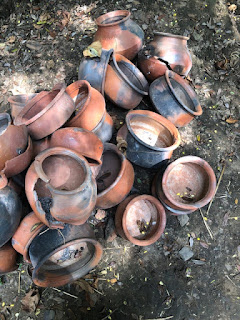 On these you can't do that anymore grounds the Boss can't write about the working joe and josephine, the Billy can't sing about Allentown, and Carole can't tell you that it's too late, baby, now it's too late. Gardner can't write Grendel to retell Beowulf so that the hero is the monster, at least from Grendel's perspective.

You'll also find yourself saying stupid things like "those evangelicals who support Trump aren't _really_ Christians" when they tell you that they are but you want to think there are "real" Christians or that you are and it's all too hard to take them at their word. There might be lots of different kinds of people calling themselves this and you have to sort out what's what and who's who.

This failure to take complexity seriously is seriously a problem. Imagining the vile bigot is a "Christian" isn't too much imagination. It's far too little. We naturally spend too much time in our bubble and maybe not enough thinking about what it would be like to be, say, _that_ person. We don't have to _like_ that person or what they are saying or doing. We have to imagine that what they are living is real for them. We know we're stuck in our own box and yet we have to get into someone else's box---and if that sounds hard or impossible, why should that stop you?

Yesterday at the grocery store---I always try to go between the rushes because I'm privileged like that---I watched a lot of struggling people. Not that many were much older than me but all with more evident issues, and those were just the issues you could _see_. These are the folks who slow you down in the aisles or in front of the produce, who don't know you're trying to get by, and you realize that you mustn't, you can't, you shouldn't get upset with in the least. They are hurting. They don't even know that they are an "inconvenience."

Instead we might try some sympathy, then compassion, then empathy, and if we really wanna go out on a limb, imagination. What's going on in their lives? Are we allowed to do that? Anymore? Ever?

And, yeah, there was a moment too of potential road rage because that person in front of me not only did a really dangerous and stupid thing, they knew it, got made at _you_, flipped you off. What's going on in that sad, messed up life? Empathy goes all ways. Not just the ways you want it to. Empathy makes you feel things you don't want to feel but also teaches you to want things you wish didn't have to feel, just to be human.

Being human is harder than being a humanist, I mean professionally speaking. But what humanists do is try to teach us about being human. Or so I've always thought, I could be wrong about that too.
Humanists are supposed to be at once honest critics and given some kind of artistic license, the sort that gives permission to acts of the imagination.  As mental or intellectual acts we're supposed to reach into facts and ideas and situations and histories; as emotional acts we're trying, best we can, to _feel_ human enough to feel other humans. We're not them, we're like them, we're nothing but them all at once.

When you're a humanist and an educator matters get more complex still. In my college classrooms I do a fair amount of self-conscious dissimulation: I don't want my students to know what I might really think or believe. Apparently that works well enough because they often ask me, sometimes inside, sometimes outside of class. I ask them in response, "Would it make a difference what I think?" I'm trying to give them permission, even safe harbor, to disagree with me, to come to their own opinions and conclusions.

Sometimes I do tell them what I think and dare them to argue back so that they learn the difference between an argument (a good thing) and a quarrel or a fight or something that makes no difference because there's nothing to learn. So we must learn to lie professionally to see what happens. This is a kind of humanist license too. That we also do that to protect our children or friendships or other things is also being human.

Let me go further. When you teach religions, like I do, you're constantly barraging yourself with the inner question "you mean, adults think this?" Religions bring out the worst and best in people---they are usually a train and a train wreck at the same time. Wait, what? Because it can hard to believe that people think things you know are, at best, far beyond credulity. That's being kind, which is where you need to begin. But then you have to imagine how anyone could think that, believe that, do that, and ask why. And then you realize it's for worse and sometimes for better.

If you only report academically what people say or do, which is what most scholars of religion do, then you're likely just another academic coward. You have to imagine and then, dare I say it? You have to judge. And you have to learn to judge. It's not just something you do without skill. Judgments are like sky diving or scuba but people treat them like it's just a step off the curb or the kiddie pool. Listen up: You're always making judgments so you might as well put your head and heart into it.

Thinking is a skill. You might not be that good at it, admit it. It takes practice. And you always need more practice just to be adequate. Whether you reveal your judgments or rather when you do is another matter entirely. You have to make judgment calls about your judgment calls. In my squirrelly world, we call that yoga but don't let that aside get in the way of the point. You learn how to imagine more selves when you are willing to imagine others _and_ take on that whole critical thinking agenda that keeps you from being stupid but might get you in trouble.

One more thing while we're imagining either religion or politics. You have to imagine the worst possible things that people might do or think. Because people will do them. You also get to imagine some of the best things people do and while that doesn't make up for things, it reminds you that darkness can't crowd out the light, that it might just be the other way around. We're in troubled, deeply troubling times: the world is burning, there's war, strife, poverty, maybe near pandemic.
There's America led by this dangerous, imbecilic, anarchistic, vengeful sociopath and his compliant, complicit enablers and followers. And you have to try to imagine _that_ too.

You realize that no one answer will suffice to explain the malignancy. Is it their fear and desperation? Anger and projection and bigotries? Is it ignorance, willful or more strangely morally vacant and insouciant? How does any of this happen?

When we talk about the people who could lead us with some modicum of decency the knives come out. No one gets a pass, everyone needs to be accountable, there's no reason to bypass or ignore. We can ask for penance, emends, apologies when they seem due. We can demand justice and fight for that too, especially for people who don't have the means or the privileges that money buys. But then there is also this: we don't have to forgive nor ever forget. Humanism actually demands that we don't.

Humanism demands that we don't give in to forgiveness, which is too often the easy way out. Rather it demands that people learn from their mistakes, tell us they have, and then _act_ like they have. This is called progress. This "do better" is our only honest recourse because no one---not Mandela, not Gandhi, not King, not Jesus, not the Buddha, No One---can withstand the scrutiny that demands perfection.

Everyone's got a shadow and, yes, grave mistakes if you live long enough. Can we learn from our mistakes and do better? We will be judged by all of our efforts, and sometimes it warrants sanity to say we need to judge considering the worst sins committed. But to be human we're going to have to do a few things, so lemme summarize:

*We're going to have to imagine and to empathize even when it feels bad or worse to have to do that.

*We're going to have to assess and use our wits and look for evidence and try to ask what's true, as far as we can tell.

*We're going to see how people respond and if they are capable of sympathy, compassion, empathy---and not give in to the idea that everyone does when clearly everyone doesn't.

*And then we're going to all have to learn from, with, and still in our mistakes because not one of us is pure or perfect. It's no crime to take occasional credit for doing as much. We don't need to diminish ourselves anymore than aggrandize. When you're trying to be honest you don't forget your failures or regrets but you do try to do better.

If you can try to learn, do a little better, then you stand a chance of being able to live with yourself. And that is supposed to be the easiest and the hardest thing you ever learn to do. And wouldn't that be grand?
Posted by dbrk at 2:40 PM