Towards the Freedom That Binds Humanity

A few thoughts from the far side of the world this morning before we begin a long-awaited pilgrimage. I have prepared some forty years to have this opportunity.  I have always wanted to make this particular journey in India ---and I don't expect that others would want to join me.  I revel in our ability to create lives in which the things that move and inspire us, the experiences that nurture our spirit reveal something important about the diversity of our shared humanity.  I go on this pilgrimage not seeking god or enlightenment or some form of liberation.  I go because, for me, this is how I might find a richer sense of what binds me to our shared humanity. 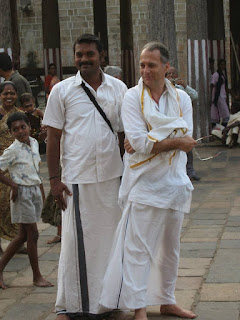 But this pilgrimage comes to on the heels of news from home--- the mass shooting in Orlando, Florida---that also makes me consider more seriously how we must turn to the powers of the secular in order to dignify our spiritual and religious claims.  Not the other way 'round.  We need not share religions because we already share humanity.   Our recourse is not making the same pilgrimages but in a democratic process that maintains that we need not agree in order to share an ethical life and a meaningful human journey.
There is only one way to change the laws of the nation and that is to put forward candidates that will change them because _you_ voted. Imperfect as that system may be, imperfect as all candidates may be, the alternative resorts to the violence we must condemn. More cowardly still would be to abdicate the power of democracy and make yourself marginal by the righteous indignation that claims to want change but rejects the painful, slow process that democracy can create. However, to change the culture of America will require far more than laws to enforce. For that, we must change hearts and minds. That possibility lies not in furthering claims to shared religious values but instead understanding that there is a shared humanity that can appear in religious values common to humanity.
This is the power of the secular over religious discourse: if we take seriously what it means to participate in society in which _shared_ values are made into laws created to tolerate differences. Religion, of course, is not the sole source of intolerance but neither are its claims to altruism, inclusion, and tolerance reason to deny its role in the worst things we humans do and say. What is left is not an appeal to religion, for better and worse, but rather to human decency that compels conscience to admit that it is humanity that transcends such personal, religious claims.
While we cannot compel others to share our religious values, we can disempower and marginalize those who will not share in our humanity by tolerating their views only on the periphery of democracy. We will not all agree but what have we taught each other about inclusion that confers human dignity? When we are not educated to appreciate human differences and the role of religions in history, how can we engage in serious conversation or use the tools of argument? Do we refuse to invest in the public good because there is too much profit to be gained and too little shared conscience? Change will be incremental because all of these issues require time, effort, and seriousness. Our outrage is justified, no doubt. But outrage can, at best, inspire a meaningful process, it cannot create a durable result. To create a deeper humanity, we will need to learn more about how differences make us human and how we are only the "same" in the dignity of our differences.
Svamaye Saranam Ayyappa.  This is the chant we will make today on our pilgrimage.  It matters not if you understand or care what it means.  What matters is that we can appreciate in each other a humanity that speaks in many languages but commits to the dignity of human feeling and expression.