Say "hwaet" as if you were saying "wait," only a little breathy to start. Hwaet is the first word of Beowulf. The whole line reads in the original like this:

You can figure out a slim bit of what it means, just sort of sound it out, that's the first trick to reading Old English. There's an even better way. Take three long shots of any Irish or Scots-Gaelic whisky, let the feeling go directly from the warm rush in your brain to your tongue, and you will be realizing that "whisky" is really the older word "uisce" from which we get, yes, you guessed it "water." Thus drinking whisky is drinking water. My father thought that. 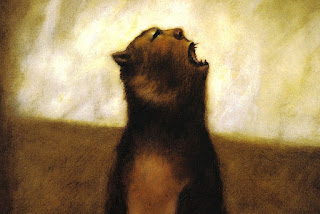 If you take a few more shots sitting beside, say, the River Usk in Britain and you might as well be anywhere because you'll be teetering happily beside the River Uisce, which is in the modern tongue is the River Whisky. I was sitting not beside that river but in it about half way down a bottle of Jameson while reading three books. But all of this is to say that reading Old English begins to happen when you say the sounds on the page as if you've had a few too many. Or just have a few too many and read Beowulf, which is what I was doing late last night or really very early this morning. Either way. You may need a few other tricks to work out the intricacies of phonology and syntax, but I assure you it's easier than Vedic or Tocharian B.

Translating from English to English, Our Poem begins: "Wait. The Spear-Danes in bygone days, and their ruling kings of courage and greatness, We've heard of those princes' heroic campaigns."

There are a lot of interesting words here but let's just look at how the text begins. Usually "hwaet" is translated something like "behold" or "lo". I hate it when translators regress into Anglican Book of Common Prayer speech to try to capture the dignified tones of Downtown Abbey. Really, we can do better than that.

'Hwaet' can mean 'listen up', 'attend here', or even lookie here, yo. It's not quite 'hey, numb nut!" If we compare it then, hwaet, it's functioning not unlike the way the word "atha" often behaves in Sanskrit. Words can behave and misbehave but that is another essay entirely. In fact, 'hwaet' is doing two different things at the same time, which is why it does indeed function more like Sanskrit's "atha" and less like other exclamations like "bho". (You often find 'bho bho' in Sanskrit as an exclamation that both means to cheer something and as a way of getting someone's attention, the way we might use "yo!" on the streets of Jersey.)

Hwaet functions in these multiple ways too, that is, it means to cheer, to call you to attention, and to invite you to something worthy of your being excited, interested, usually for better not for worse. Hwaet, like atha, portends something that is asking something _from_ you and _of_ you, not just taking up space. But there is also tad more going on here.

My daughter Charlotte was the first in our family to do the, "Wait. What?" as manner of pausing to think, to be stunned, offer a deer in the headlights look, express being confounded or a bit confused about what just happened or was said. Thus, "wait." means I need to stop for a second and rethink, revise, express incredulity, doubt, wonder, wtf-ness. The "what" gets in both the content of what and the wtf-ness of what _I think you just said_. All of this might be my imaginings of some millennial affectation but it's now all standard faire in our house.

Wait. What? Someone says something that causes the need for delay and punctuation, as if something happened, we are not quite sure what, and need to express both doubt and our own introverted shock. We wonder if we are on the spectrum or if the world could possibly be what we just thought we heard. The wonder of all is directed outwardly towards the wtf-just-happened part and inwardly to the I-think-I-didn't-get-that-but-if-I-did-then-wtf part.

Where this comes back atcha' in Beowulf's "hweat" it is dialectically like a streets of Jersey argot I would hear in my youth. When someone would say something that was supposed to have been important or meaningful we would stop them in their tracks and stop ourselves too. We'd say in reply, "So?" Not as a declaration of pause only, which is how Heaney wants us to take 'hwaet' to arrest and thereby obliterate all previous narrative before going forward but also with something like the need for more. "So?" includes a bit of confrontation, which may not be in Beowulf except as an underbelly of danger, but danger is always in the game, anywhere. Thus---this being another kind of 'hwaet' where we are being both stopped and being told urgently to keep going. Listen and Go, at the same time.  We are being confronted but, you know, in a good way.

So? Someone would say something like, "You know, it's gonna be cold on Sunday..." And taking the "you know" to be yet another version of 'hwaet', you'd say in reply, "So?" Meaning, that's important because? I should stop and think about that coldness for a reason? Why are you telling me this? I think all of this is also included in Beowulf's "Hwaet." Now it's not nearly as elegant to put the question mark after the "So." So?

I think Heaney is right when he says that the word means to stop us in our tracks. But I think it's also working like an ellipsis or even a question, that is it is literally waiting for the next sentence, it's got anticipation too, so not just a stop sign. It's a then, an atha. Heaney puts down the period and thus: "So. The Spear-Danes..." But like Sanskrit's "atha" (think: atha yoganuśāsanam), we actually not supposed to stop the previous narratives (i.e, the things we are supposed to know beforehand), but rather include them. Meaning "take all of what came before up to this point and NOW go forward" is closer to the sense.

But Heaney isn't wrong that sumthin'big is about to be said  (invoke Tom Petty's voice here to get the proper effect) and we are being called to attention and asked if we know about that. It's the ask that is coming with the 'hwaet'. There's more coming, we're not being halted only. Read it: "So? You know those Spear-Dane Kings, well, I got something here for you..." You would have to already know something about spears and their bit with Danes and their Kings, and off we go. Just like "atha" means "now" both in the sense of 'you _are_ ready for this even though it makes you wait..." and 'are you ready for this? 'cause incoming!'

Hwaet.
Who am I to argue with the great Seamus Heaney and his "big voiced Scullions" whose every utterance was closer to a pronouncement from Scripture quoting the Lord Almighty than it was a mere sentence. But I think he might take up the idea that being stopped in your tracks is not only meant to arrest all as you begin something of Great Import. It is also to be confounded, be-wondered, lost a bit in what just happened and asking for more, asking itself, being asked to bring the past forward, being asked to see how the future will change the present if you create an opening, how what comes next is just as important as being halted to pay attention to the moment. Wait. What? What did he just say? Right. Like that.
Posted by dbrk at 2:09 PM