Looking into Soul and the Soulless

"I urge my colleagues in the House and in the Senate: Look into your soul." ----Rep. Steny Hoyer

First a few paragraphs of sermon. Apologies in advance. This is the morning after the impeachment of Donald J. Trump, President of the United States. America hasn't been this divided since the brink of civil war in 1859. So let's ask about soul and what that means. We're gonna need some. 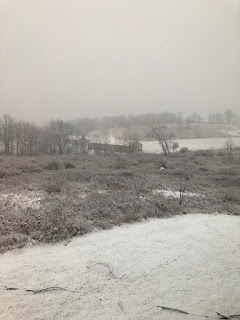 Soul? Truth is, you won't see what isn't there. Soul isn't a cosmic entity; it's not something we possess much less save or have saved. Soul is where we go in the depths of character to experiment with truth. Soul is the place where feeling and knowing converge. It is the decidedly human feat of reaching into conscience, into one's heart, into the differences that make all the difference and deciding for the truth.

When we make that kind of decision we can't mistake what it does to us. It asks something _from_ us. As the Upanishad put it, soul asks us to choose the real over what is merely preferred. We're going to have to start with the idea that the harder truths are not easy to accept even when they are plain as day.

Contemporary soul seekers tell us that this process begins with "radical acceptance." When we enter into radical acceptance to recognize the hard facts then what we feel takes hold in ways that cannot be denied in the conscious world, and _that_ is the soul, emergent from beneath it all.

Soul makes you joyful because it revels in such truth, even what that hurts. Soul leads you to the truest sorrow because it is the grief that must accompany love as its shadow. Forget the metaphysics. Soul is when your humanity wins out over all of the other possibilities. Your humanity doesn't always win. It can even choose not to feel itself at all.

Not everyone evolves their soul because we have to want to, we have to learn how, we can always ignore it. And it's easy to lose it because even the best of us do, sometimes. The longing to find and re-find our soul is the process of feeling more human and so more humane. Soul is when your humankind-ness becomes human-kindness.

But it's also possible to lose your soul. Entirely, even forever. You can want to do that because you have your reasons, your goals. Goals are a way of postponing the longer look into your soul. Goals substitute for meaning because goals can be achieved but meaning has to be made. The hard way. That's breaking into the soul and sometimes breaks the soul.

Not to worry. A broken soul hurts but if you know its broken then you can take up the broken pieces and make more. Sometimes other people will help too with their broken pieces and together you can make a soul that feels its worth. But when you decide to lose your soul or give up on it? There are consequences. It's decidedly human to want what you want more than anything that is true. You can be soulless. That is human too.

So back to the point of Representative Hoyer's plea. America's soullessness doesn't end with these elected Republicans. It extends into Fox Culture (I know, I know, an oxymoron). The soulless now include a significant number of rural whites who form the Fox Base. Why am I so hard on them? Because they don't want to look for anything more, anything else that moves them to look again, more deeply. They would rather have their souls saved by something other than their own efforts to look into self.  They want to be forgiven rather than learn from their mistakes. They would rather revel in their grievance culture and claims of victimhood than take up their soul work. Most don't even know that the soul needs work and that that work will be the hardest thing they ever do.

But the story gets worse because there are educated suburbanites and exurbanites who you'd think_could_ know better but they've chosen soullessness. Why? Because they have "goals" and that gets simpler still: it's really only about the money. Meaning is for losers, only goals matter. There are no moral considerations, no matters of character that they will prioritize over their "kitchen table issues"---their ethics are purely transactional and amenable to Trumpism's soullessness because they care more about money than anything else. They have personal goals, goals for their families, and nothing else has priority. This is why the Republican Party is a pathology and, more dangerously, a political force in an America that has lost its way.

All is not lost. We can look for America's soul when we look into our own and ask what more we want from life that makes ourselves a gift to others and to those deeper feelings of truth. It's the long way home.
Posted by dbrk at 10:58 AM