Trying Not to Fall In Love With Lonely

There's a difference between tradition and provenance. Or at least we can imagine one. We need more space to move with boundaries and limitations. We need to feel freedom instead of just announcing its possibilities. Who we are cannot be separated from what we have been even when we lose the threads of contiguity. It's in the space where we lose connection that we can create another. 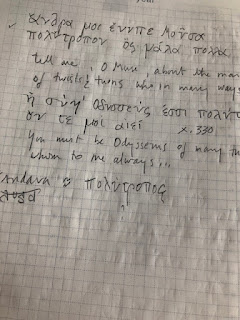 Tradition is about carrying on, the effort to bring the past with you as you. Its sweetness is to bring those past with you too. It's shadow is their weight, _their_ shadow unaddressed and incomplete. Tradition's warmth is in its invitations to participate in pasts as if they were present. And this shadow needs to be made altogether obvious: we become captive of what has been, truculent and less pliant to learning, to growth, and change when we hold too tightly. We will be lost if we abandon it all entirely.

Tradition "conserves" and when it serves us then we steward and sustain; when it does not we hoard, become passive, and, worse, merely recursive. How can change follow from recursion? The Latin is helpful, -servāre means to keep, save, pay heed to. The reply must include accident, failure, and the willingness to pay heed to these as possibilities and even gifts.

These strike me as undeniably worthy considerations that can all too easily devolve to that drowsy numbness that Keats writes about in three short but immortal stanzas sometime in 1819. The Ode on Melancholy reminds us is that these feelings are not best relieved with wolf's bane but with the joy that is _its_ shadow. We can no more know joy without that specter of grief than we will somehow transcend grief altogether.

The Japanese call this mono no aware, the empathy we feel when we recognize a deeper, gentler mourning that comes with mortal apperception. That Keats saw this before he was twenty-six should strike us as greatness nearly beyond human reach. But he knew he was dying. There was work to do. The way Zen treats mujõ, "impermanence" is more accepting and with a greater reach towards the poignant than the typical uses of the Sanskrit word anitya. But matters are more nuanced here than we might think. When anitya's impermanence is made one of the three characteristics (laksana) of reality (along with duhkha [suffering] and anataman [no-self]), it's sensibility is that it too is more asset than liability. There's no doubt that whatever asset this impermanence is cannot reach more deeply without its equally innate liabilities.

When does tradition give us weight and value? When is it a burden we bear, both to carry and from which we might be relieved? I prefer the form of questions because answers too often pursue closure. This is precisely what we cannot admit if we still find value in tradition; closure is our nemesis because it can only be another form of annihilation, a wolf's bane for truth. Traditions that pursue the absolute---the only begotten, the final truth---either suffer from shiftless righteousness or _must_ be put to an end because they were insidious from their outset. We're more confused by these issues and differences than we are usually aware. Not knowing when to hold on and when to let go is to be human. The divine is our usual bypass so we can tell ourselves that there is an eternity that knows when we don't. Pretending we know is another false finality. We're going to have to be able to change to find tradition's deeper value. Eternity presents only closure.

If that seems paradoxical you're not surprised. If we can become more alert to our losses, be not quite so drowsy as Keats urges us, then we might avoid "the ruby grape of Prosperpine" and rise instead “on the rainbow of the salt sand-wave.” Where else too but in eyes of one's beloved? This is no mean avoidance but a path to avoid bypass, which if we let it will steal our humanity by making false promises of blissful exception. There is no exceptionality to our remarkable opportunity to experience a moral life.

Keats knew we must become more stalwart in our vulnerability, not passive but more receptive lest we yield our power to more soporific babble. The more formidable task will not banish apathy nor indulge indifferent denials, it will demand we look back and forward at the same time. Tradition is only confinement when we move in only one direction, in only one form of time, captive of its arrows rather than whirling in its creative maelstrom. Chaos is never comforting even when it's necessary.

With provenance we want to draw out a comparable set of ideas but also feelings that tradition can take only forward. Provenance moves in more directions at once.

Etymology is not definition but every Sanskritist has this weakness and too few consider how usage alone discards meaning as if there were no archetypal values. What resides in the root becomes the possibilities emerging above. Provenance has to do with origin and production, from the Middle French provenir "come forth, arise, originate," from Latin provenire "come forth, originate, appear, arise." But the -ven(ire) is to come, and has the sense of an onslaught, even an attack. (The Sanskrit cognate is likely /gam, as in āgama, that which is coming _all the way_, [prefix ā- plus root /gam]).

Thus provenance is there from the start and comes all the way, it comes through and with. We do not carry on, as in tradition, but carry forward and _towards_ and _with_. Who do you carry _with_ you when you step forward? That is your provenance. What is coming at you from behind as you turn to take your stand in the world, knowing you must also keep moving? That is provenance.

Tradition does not like to admit mistakes much less learn from them or correct them. That's not its job. Its job is to not forget what was. But provenance tells us who have been and that that is still coming towards us as we go forward. Provenance is more willing to change because it does not fix us in a past but point from the past into the future.

If we fail at both tradition and provenance then we desiccate conversation and consign it only to an eternal present. However much we might insist on remaking every self as the moment this strategy of the always be here now is interesting for its requisite denials. When we deny our intellectual ancestors we become captive of our limitation when we might actually be freed by provenance.

In the opening pages of Walden, Thoreau made this mistake. He wrote, "I have lived some thirty years on this planet, and I have yet to hear the first syllable of value or earnest advice from my seniors. They have told me nothing, and probably cannot tell me anything to the purpose."

I can admire Thoreau's petulant rebellion, his deep desire to be unshackled and willing to take his own steps forward. It seems remarkable to me that he should refuse his mentor Emerson's advice in Nature, but creativity often yearns for something new. Innovation knows something more from the past and might spare the folly of believing we invented this inner fire. Thoreau burns within but with too little love for the source of his message and its messenger.

Agni is the first word and the first god of the Veda. (cf., Latin ignītus, past participle of ignīre to set on fire, ignite, equivalent to ign(is) fire + -ītus.) Provenance reminds us that Agni invented us no matter how we cultured ourselves with its messages. Agni is the source, the messenger we are seeking inside and conveys the message when we offer something of value. Provenance is sacred because without it we can only invent ourselves.

If you fall in love with lonely you'll end up that way. Please don't.

Without our offerings to Agni, the fire within burns with the delusion that we have invented ourselves without each other and those fires we cannot see. Provenance is our willingness to acknowledge that the messages we create now, in our present, also come from these inner messengers of time and fire and life's ever kindling memory.

Provenance is more than acknowledging or honoring the ancestral fire that burns in us now. It is the effort to do what feels wholly impossible. The old Zen adage puts it right, "to surpass the teacher is to repay the debt." But it is the feeling that this can't be done but must be tried, with al our heart, in every effort, not to achieve perfection or finality but instead to carrying on and forward---this is the value of provenance.


Try something impossible not merely revering the past but creating from it what you imagine could be. When we live in between what is and who we hope to be then we have found the seam between tradition and provenance. That is a space we might seek in both memory and the present if there is to be a future worth living.
Posted by dbrk at 10:31 AM