You've been seeing a lot of crows lately.  And we’ve been talking about the serpents.  The crows and snakes come together. That's the secret we need to begin with.  The snakes feature in the stories as the representatives of true source, the unconscious, the deepest and most primal forms of desire, fear, beauty, and awakening. The Hindus tells us that the snakes are the sons of Kadru whose sister Vinita is the mother of birds.  The myths never lie.  Or to put it more properly, the myths lie so that we can find the deeper truth.

While the mythologies of the snakes describe the self in three selfsame forms, the birds are more varied, more complex because they come as messengers, vehicles, from above rather than below. While the raptors soar above and the songbirds and peacocks make themselves known more proximate, crows are the birds of the in-between worlds. They are here and there, above and below but also neither because they reside in the seam. This seam, the place of in-between is where we reside as beings of paradox. We want to be close but not held too tightly. We want to be free but not left to loneliness. We want the blessings of capacious memory but know that every form of light casts its own shadow. 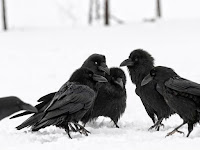 Those messages we are not always keen to hear but they come in the unmistakeable sound of the crow. What we can learn from the crow comes from a deeper place but that means coming close to them, keeping their intimate company. More about this as we carry forward. Mythic worlds never leave out the serpents and birds. Hindus know they are step-siblings and that their father Kashyapa is the sage of light.

Crows have storied histories as shadows, messengers, harbingers of prophecy. All of us share the same “prophecy”—we mortals are born from the depths of memory, from the unconscious into evanescent forms that must return to that common source in death. In the meantime we share the gift of life because of the dead who’ve come before us and who will inevitably join. It’s not all so maudlin—the crows coo, growl, nuzzle, and love deeply. We rarely hear those intimate conversations because they are held close but never mistake their public announcements.

Where there are crows there is food, life, often in the form of death. Without the carrion-eaters the world of food—always rife with danger— is even less safe, less pure, less “clean.” It’s a ceaseless and settled matter that we find our way through life to death but are as much in avoidance, delay, and circumvention. We retreat from the truth when it comes in black because its announcement is unmistakable.

In Hindu worlds, the crows and ravens are the keepers of memory, conversant with ancestors, the vahana of Lord Shani, who offers the saturnine dispensations of karma. Each day before food, a pinda or ball of rice is thrown upon the roof so that the crows will eat first—feed your shadow, nourish memory, honor those who’ve come before, keep the company of the entirety of self. That pinda-feeding is done by the cook so there is no further intermediary. Crows are what we call “first category beings,” and first category is food—it comes before sex, survival, relationship, even death. To understand the priorities of the world is to see food first because we have arrived, we are messengers from death come into life, the living eat, the dead will be eaten again.

Such is the nature of reality itself—to have become food is to live, to thrive, to carry forward all that has come before. No less an authority than Taittiriya Upanishad makes our point, and it’s worth quoting at length. We learn that “food” means every kind of food, be that for the body, the mind, or soul.   Here we go:

We feed the crows to feed ourselves, especially those parts of ourselves we cannot remember or choose to forget. We feed the crows so that they will leave and come back everyday. We may not always welcome their messages but without them we starve in only the light, we cannot rest deeply in the darkness that restores us because we must close our eyes to rest. The crows watch while we sleep in the unconscious, wander in dreams, digest the food of thought and feeling to transform it into more memory.

Of course, we fear our memories as much as we treasure them; we lose more than we ever can recall but the crows bring them back and forth from the immense serpentine self that resides below. All medicines put us at risk, for what heals and nourishes challenges and includes some or another toxicity that we must also assimilate. The crows are our shadow messengers and when they appear, when we hear them caw, we need to come closer, to become them so that the songs of intimacy that coo and growl can be heard and shared.

Crows, like selves, come in threes. When you see two in a tree, look for the third usually feeding not the dangerous below. But they are like the star of the same name (3 Corvi) because they appear as one, like the self in its triadic singularity: I’m not you, I’m like you, I’m nothing but you. As the messengers of Apollo, the crow is perched on the back of the snake Hydra where it cannot be eaten because it has decided that this most dangerous place is the safest place from which to see more. The Greeks also tell us that the crow may even take the rare white form to dispel some of that serpentine anxiety: the messenger does not, after all, always presage dark news.   None of like to “eat crow,” that is, to acknowledge that our certainties have failed, that our claims have been overwritten by time or circumstance or some other better truth.

We become twice-eaters because the crows have already eaten, whether that is the fresh rice of the day on the sun burnt rooftop or the carrion that comes day or night. But it’s when we become twice-eaters of light and shadow that we alchemize into greater souls, nourished by the cycles of death and rebirth in each breath.

There's more because the archetypes carry across multiple cultures and many, many histories. I'll be writing about this more than you can stand. You know being a crow and a serpent every now and then.