Provenance and Progress, Seeing At Once Behind and Before 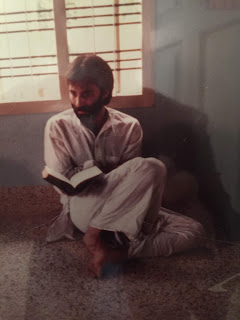 I'm often asked about Rajanaka's sources and traditions, it's provenance. And it is to provenance to which we often appeal when I describe the relationship between Rajanaka's historical relationships to south India and Srividya and it's very forward-looking, progressive values. Appa was not content to use only the sources of Indian tradition when he knew quite well that knowledge belonged to all human cultures. He believed we must evolve and change, and that we could be both revolutionary and claim provenance.

This complementarity was the very heart of Appa's heart. He was deeply committed to rooting and valuing the past and, at the same time, _fully_ dedicated to a progressive, innovative, even pioneering future. To reach into the past was no matter of nostalgia. Sundaramoorthy was not one to ache for some chimera of utopia, attempt fabrication or settle for less when it came to understanding and criticizing sources. He had no notion of a golden age, no need to invent a past to romanticize our human achievements or by-pass our shadows and failures. As a brahmin and a privileged male he was keen to see himself and his tradition as important players in the history of oppression and to take responsibility for that past. That shadow of provenance was part of what motivated him to bring about a more evolved present and envisioned future. Still, Appa was not about to give up the past; such costs would not justify abandonment. There is no reforming the past and no revisionism could withstand the truth. But there is the possibility of bringing the past forward. And _this_ is what he meant when he used the word "provenance."

So first, if I may, a bit about this perhaps unfamiliar word.
Provenance usually refers to a place of origin, particularly applicable to a work of art, an archaeological specimen, or concept. For example, in Charles Eliot's Buddhism and Hinduism, A Historical Sketch (see vol. 3 of 3), he writes, "The Garuḍa may itself be of Persian provenance, for birds play a considerable part in Persian mythology." We find a proximate etymology in the Middle French, provenir, which means to come forth, arise, originate. "Provenance" would be a present participle form (the endings here being cognate to Sanskrit formations which mimic the possessive suffix, just fyi). We can find even more provenance by taking provenance further back to the Latin prōvenīre to originate, which adds the pro- prefix to the verb venīre, which means to come. But nothing about the etymology tells us about the _sense_ of the word.

An intimation of provenance is not merely that things have traceable origins but that there is authenticity, genuineness, a sense of transmission, value, and continuance in practice, trade, or comprehension. Thus to have provenance is to claim sensibility, substance, and faithfulness. When things have provenance we mean to confer a value of constancy and worth---they have made the cut and persisted. Now, of course, things need not have provenance to have value since that is a measure made by other criteria such as efficacy or relevance. Be that as it may, Rajanaka is a humanism that speaks to the present because it takes the past seriously.

Historically speaking, Rajanaka goes at least three generations deeper than my Appa. I can trace it to sometime in the middle 18th century in south India. How much further in forms that resemble the present? I wouldn't venture to say. What Rajanaka's ancestors thought about the sricakra, the goddess and Shiva's complex mythologies, and the rest, I can only guess. I would be happy to explain more about Appa's teachers and how these teachings passed forward as well as textual sources, though those I caution are more important to western notions of authenticity than India, which regards oral tradition the core of provenance.

What I see as the core of Rajanaka is the strange and rather everyday relationship that is made between provenance and progress. Appa was keen in every way to move things _forward_, be that in ideas that would include science or critical studies in the humanities, or in social progress and change that would revolutionize society to foster justice. As I've said briefly in seminars, I am sure that teaching _me_ by inviting me into his ultra-orthodox household was a principled example of his Rajanaka teaching.

We studied ancient, even timeless, mythologies, rituals, philosophies, and yet he would never allow them to sit comfortably in some sanctified, wistful bathos. He insisted we upgrade the program at every possible opportunity. Why shouldn't women or gay folk or anyone have a chance to live and study and love as they wish? Why should tradition be reduced to recalcitrance, marooning us in a delusional past when there are so many frontiers we must explore and boundaries to reach?

One of my only regrets is how few of you met this visionary soul---though I tell you those who have will repeat as much about his graceful percipience. To look deeply into the past and to look forward at once, that was Appa's Rajanaka. He cared that at one time we might call it "Tantra" or "yoga" and "Hindu" but he would not have cared that those appellations would require revision and reconsideration. Look both ways at once. That's the true beginning of it all. Rajanaka's provenance continues in you. Thanks for that. Really, a lot.