On the Originals: the Sublime and Ridiculous

For many years so many of you have asked me about learning Sanskrit, sort of aching for the originals. I get that, there is so much I love composed in Sanskrit (and other Indian languages) where the taste is so much more pungent, soothing, profound in the original once one has enough context and exposure. Got 40,000 hours? That's usually what I say in reply. 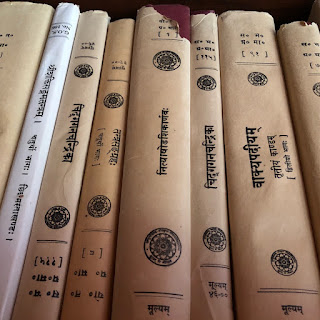 That's what it will take to have enough exposure to make the difference that the language skill's difference _really_ makes. Oh, and then you have to spend a lot of time in culture to fathom how what people say, what they say they do, and what they do are really never the same thing. Anyways, there are times when knowing the original isn't sublime but rather deeply disheartening and disturbing. Much the same can be said about every other tradition's foray into things religious.

I was sitting here reading a Tantra in Sanskrit this morning and I realized that it's not the parts that I don't understand that I find disturbing but the ones that I do. (Mark Twain said the same thing about the Bible.) The "problem" here is historical, not cultural, the work is anachronistic, too much of it founded on assumptions or insights that are simply no longer true. Further, like so many religious artifacts, it's claims to truth do not operate _primarily_ in metaphor or symbolic thinking---they actually think this stuff. The ridiculous is presented as sublime. And thinking it otherwise is buying into their ridiculous.

Call me dense to the sublime but after a lifetime of reading this stuff, I am not uncomfortable saying this. What's "disturbing" about all that isn't the mere bullshit proclaimed but the dangerous fact that so many are still willing to buy into this kind of religious nonsense. Can we keep it a bit more real and read it for the metaphor please?

Lemme be clear: It's nonsense because it's founded on assertions, claims, private experiences, because it fails every single test of shared evidence truth and claims incontrovertible truth and reduces reality to personal "facts." This is why religion and delusion have so much in common. I won't specify the particular material's pratfalls---you're going to have to trust me that it's beyond the pale of contemporary credulity. It's just not the 11th century anymore. Thank goodness.
Posted by dbrk at 10:59 AM