To Embrace the Shadows of Integrity: Love, Loyalty, and the Real News 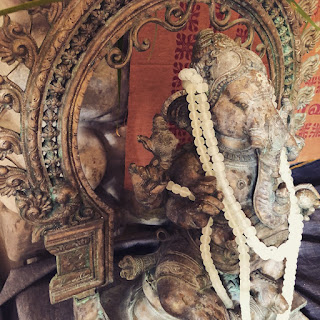 Appa once said that not every teaching is a blueprint for life, things to learn, assess, and apply. Some teachings are cautionary themselves tales. In other words, the teaching does not merely _offer_ a cautionary tale, it depends on our wilingness to apply its value with some caution. I have in mind here how we love and commit, how we feel loyal and supportive of one another.


These virtues and tests of character are not _only_ teachings: they require our caution because commitment too has its shadow. When we trust and feel deeply in the embrace of decency and integrity we move more easily, like we do in a well-lit room. But when leadership means to make the shadow of integrity it's method, it's operative force and energy, we cannot help but be affected by it.

It occurred to me that one of the many reasons these are such challenging times is that things that we must cherish for their value and virtue are being used for the very worst of reasons or are otherwise attacked. Thus "loyalty" is both used to exploit its power and value _and_ loyalty is questioned, doubted, and made the enemy of decency. There's nothing new about this. Fascism has its obvious ways, Hannah Arendt, Orwell, and countless others have been keen observers. But if I may say a bit more?

We respect people with deep and heartfelt convictions because, no matter what we might think about their ideas, it is when they are made in good faith, with honesty and integrity, that we come to know someone. It is a lens pointing directly into character that focuses our attention because any such "belief" translates into intentions, actions, and outcomes. We are all guilty of some degree of hypocrisy and fakery but it is that test of character we embrace as grounding our spirit and our path.

Our Rajanaka way leans into tolerance, acceptance, and looks to listen and honor difference---it's another one of those 51/49 matters, where we come to grips with a useful, important bias that serves us. We _want_ more of the one---tolerance of others' convictions---than we want to believe their views lead to corruptions. But here we arrive at the first juncture of painful recognition.

Those now governing us and so setting our collective tone and establishing the ethos of leadership and social endorsement are at once dogmatists, unyielding _and_ willing to punish or ignore others' for their values and convictions (think: Pence). Worse, they are also shameless narcissists (think: yeah, that guy). In the latter, dogma is nothing more the next moment's full throated toadyism, abdicating every judgment or grasp of reality for something so obsequious and unctuousness that we often feel literally sick. Such flummery is accompanied by a kind of stridency and sanctimoniousness that brings chills down our spines for the way servility is masked by certitude (think: Huckabee-Sanders). For our part, we want and _like_ trustworthiness, loyalty, and commitment to one another, but the kind of violation we are living through forces our values into their malevolent gumbo---and we are left to sort it out. What I mean to say is that since we are _all_ in this world together, we cannot help but grieve and question and wonder about our own bonds and fealties because the very _notion_ of a healthy loyalty is under attack. Loyalty, which we cannot live without, is being used for purposes that are meant to divide us from our very selves and debauch our better angels.

So what can we do about it?
We can hold fast, but not too tightly.
We must assess and judge but not without a willingness to change our minds and follow the evidence where it takes us.
We can and must always try to fathom that tolerance is not the same as endorsement and that convictions strongly felt do not make for truth.

A conviction can, of course, be truly felt and argued without being true. But it is that hope and aspiration for truth that can be shared and demonstrated that must continue to move and motivate our conversation. Every time someone says "don't judge" remember how that can also debauch the truth, not merely support tolerance. Ah, a cautionary tale.

When we report all beliefs as true we can easily succumb to false equivalence. Our individual testimonies must be tested in the crucibles of shared evaluation: it's either raining outside or it's not, look out the window to find out, but please don't report both are "true" because there are opposing opinions. A beautiful mind is a cautionary tale.

We love our tribe, our folks, and the company we keep but this too can be reduced to an identity politics and that is as insidious on the left as it is on the right. You know the love of identity is becoming a problem when you reduce yourself to but _one_ identity. Nothing can live in but one way; admitting complexity may feel uncomfortable and invite compilation, but identity without complexity is too straight a line, not enough twist or turn. Loving someone for who they are is not the same as offering or demanding fidelity just because they are more or less like ourselves. There is such a thing as criminals we love---but have to lock up to be safe, and some of our own feelings are that way too. We're gonna need some Dharma and some wisdom to tell the difference between what's tolerable and what we must not tolerate in ourselves and others. And then ask what we can do about that. This is not only challenging us, it's being made a feature of our current leadership's manipulation; thus the abuse of "truth," the "law," and the difference between "fake" and real news.

So lemme land the plane.

What is under assault are not only the things we need and want, what is being abused are our most cherished and most fragile values. We _need_ loyalty, good faith, and commitment and those values are being used, manipulated, and abused for the purpose of undermining our own feelings and expression. The very notion of character itself is under siege and while we must try to hold true and steady, we must also recognize the peril. When Trump decouples truth from words and feelings we need, this is not a bug, a failure, this is a _feature_ of his debased and dishonorable nature. To grasp that there are such persons in the world is hardly encouraging and we wish there weren't.

But alas, to be better selves we will have to come to grips with how easily people are led into the worst of what is truly the best of us. We humans can love one another with fierce commitment. Let us not forget its value and its perils, how that teaching is a cautionary tale itself, and how that need for loyalty can be used both for good and manipulated to undermine its own value. So it goes. To live with integrity is to embrace its shadow. Carefully. Rage on, calmly.
Posted by dbrk at 8:45 AM