Everybody Loves Rudra But No One Wants to Admit It

Everybody Loves Rudra
But No One Wants to Admit It

What I am about to write is not good for business.  I tell myself that almost every time I come to this page where I know I have sympathetic listeners.  But I know it's true.  We human beings do not like our truth drenched in acidic facts and you can't tell me that you don't like the puppy story that ends _every_ broadcast of the nightly news.  What we _want_ to be true and what we sorta'kinda' have to admit to ourselves is true is a fundamental breach, an incongruity that makes us really not like incongruity.  Oh for the world to be more like a south Indian coffee: hot, sweet, satisfying, and accessible so long as their is milk available. 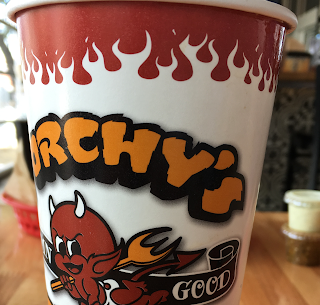 What I mean too is that we like to think of ourselves more like the Buddha: the world suffers and we must be compassionate.  We don't like to think about how rage, anger, and seige motivate us to our better angels or to our exigent needs.  We're not sure about Rudra.  How could we be?  He's not sure about you either.  I'm telling you, you love Rudra.  It's just hard to admit it.  He loves you but only if you take out the wrecking ball.

I come by this kinda' naturally because I got beat up on the streets of Jersey and then got beat up again at Harvard.  I am sure you have your story too.  But don't we all wish it were more like, "I left home because I needed to find a deeper truth, suffered some of my own accord, sat under a tree and got enlightened, then spent the rest of my life helping people." (Apologies to the Buddha for being so hard on him here, but you know, it's heuristic, skillful means and all that)  So you mean, you too aren't the historical Buddha?  Shazam, Goober.  Neither am I.  It goes more like this,

"I was raised out of steel here in the swamps of Jersey, some misty years ago
Through the mud and the beer, and the blood and the cheers, I've seen champions come and go
So if you got the guts mister, yeah if you've got the balls
If you think it's your time, then step to the line, and bring on your wrecking ball..."  (N.B., Boss time break here, my favorite kind.)

It's Rudra time.  Get out your howlin' wolf, let it bleed, there _are_ tears in heaven.  Start there.

We prefer to to flourish but fail to admit that we feel this comfort because there is some safety net beneath us, we want to be comfortable enough because we need that comfort to believe we can flourish.  This is a mistake we all make.  We don't like discomfort, strife, or crisis not only because the are all too real but also because we want to reject their being _the ordinary state of affairs_.  I sort of never tire of reminding that the best part of the Gita's argument is that we are need to _notice_ what is going on _first_ and when we do, well, it's a call to arms.  That makes me sound like I am celebrating the 100th anniversary of the Bolshevik revolution (which it so happens to be) but it's not the same.  There's no violence being advocated, only vigilance and determination to take the world to be as threatening, precarious, and downright predatory as it is to we fragile (but oh so resilient) human beings.

The call to arms is called in Mahabharata the "call to the yoke," and there you have it.  If you live in a house of lac (see the Mbh story about arsonist murder attempts), you had better make sure that the Kidde Corporation's fire extinguisher that was just recalled is not the one sitting ready for _that day_ when in fact it _is_ just that one that was just recalled.  (Nothing like a true story early in the morning about fire extinguishers, eh?)  So it's surely sure that the call to the yoke ---that old fashioned warrior's summons to get the kids in the car, make sure there's gas, and head out with the dog on the roof (thanks, Mitt), is just moments away.  Do _you_ know where your car keys are?

Here's the take away, and it's important.  Hate does not win.  Violence is always the very last resort.  But anger and rage, however they bring their own consequences, are valuable, important facts of human nature.  By wide margins in last night's election results Democratic voters said that their vote was _against_ Trump and motivated by anger, dismay, and determination prompted by rage.  Victory is sweet, is it not?

Knowing what you are for is a luxury position and the sort of thing that gives you pause and makes you debate yourself and those you like (and don't).  Knowing more clearly what upsets you, what turns on the rage, that is of course easier but also _much more problematic_ because it's a short step to thinking less and feeling more.  That feel, don't think is going to cause real problems you don't want.  If you doubt me on that reference Arjuna at the Gita's opening and just exactly what Krsna says to him when he is all a puddle and starts making up his own reasons for things. If you find yourself doing that thing, then that thing you're doing, don't do that.

So what we need is rage with serenity.  Rage on, calmly.  Put your intelligence is that space of peace and remember that the binaries of emotion ---like this, hate that--- they "come and go" and are _just part of the story_.  Deal. Cope. Endure.  MAKE DO.  That is the first thing put first.  "This is the teaching according to the Reckoning (Samkhya)..." and that comes _before_ you can hear "the teaching that yokes to your intelligence," also known as yoga.  When you get there, to yoga, you find that in the center of peace is rage but that that rage doesn't debilitate you and that it brings with it _all of your intelligence_ (buddhi is the word) and discernment (more buddhi).

Rage with intelligence and you will rise to the occasion.  Otherwise you can just go sit beneath the tree and when you get up pretend that being nice will solve everything.  Good luck with that.  Rage can do you wonders.  So long as you don't screw it up.  That's the key.
Posted by dbrk at 6:15 AM