Lying and Leveling, A Rajanaka Experiment in Living

Over on Rajanaka Storm I wrote yesterday about Lying and Leveling with People.  You can find that archive here: http://contraiety.blogspot.com/2017/09/the-lying-strategy-or-merits-of-good.html

The thesis there was more political inasmuch as the choice is LIE BIG to (1) get the meme into people's heads ("Medicare for all!!"), (2) force the argument forward with promises you can't keep, and (3) deal with the consequences of not being able to deliver on those promises because you knew all along that it was based on bullshit or simply too impractical, not real enough.  Or the alternative, which is LEVEL with people: this is what's possible, this is what's likely going to happen, this is at least for now what we know and what we can say is most likely.   This line of thought also presents a different kind of chance to talk about our deeper processes of self-inquiry, our needs and hopes and dreams, what "mystery" means, and how Appa taught me Rajanaka. 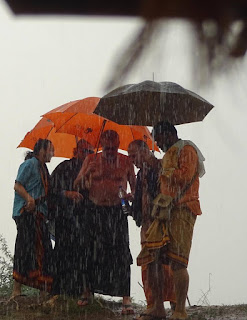 First, Appa having been reared in the most orthodox worlds of caste and tradition was determined to change things.  He wholly and vociferously rejected the social and cultural prejudices of his society.  He would tolerate no such oppression and spent his life speaking out against caste, sexism, homophobia, racism, and injustice against the oppressed.  When he got involved with purchasing the Srividyalaya school he did so because he knew it could become a focal point for social change and a platform from which he could reach into the community.  Inviting me to live in his house was politically and culturally risky, not only for him, but for his whole family.  But Appa wanted a better world, little by little and again and again, he said, we would _not_ stop doing some good.  I have often asked myself how this man, born an orthoprax brahmin in a village in 1936, raised without a father from infancy, how did he come to these values?  This is another story to tell at greater length.

Second, Appa was equally determined to go toe to toe with Indian philosophy and religion.  Let me put it bluntly: he thought most of what was said about bondage and liberation was utter nonsense.  The crux of his objection was that it was founded on Big Lies.  Sure the diagnosis of yoga traditions is irrefutable: this embodied, mortal condition is going to suffer and its temporality is problematic by nature.  Who can argue with samsara?  Certainly Appa didn't even as he reminded us time and again that we are the lucky ones, we made the cut, we survived, and we're here to be grateful for life itself, and to give something back.  People will hurt. So what are you going to do about that?  But the Big Lie comes with the claims to liberation because no matter how you cut that cake liberation means liberation-from the terms of the human condition.  You can arrive at an immunized samadhi, you can claim Oneness that dissolves the dualist experience, you can say you have powers over the experiences of suffering, you can say you are god or that you know god or that having become one with the Unconditional you have arrived at an ultimacy of exception, invulnerable from the world's travails and free-to act from this place of "liberation."

Appa thought this was quite the sell, much like I argued yesterday about politics.  In other words, people seem to need to hear these kinds of stories and claims about liberation, about freedom from suffering, some razored edge distinction between "pain" and "suffering" as if we can't avoid the former but most certainly can be exempt from the latter.  People want there to be answers, a god, a method that really does exempt us from the facts of embodied life and its terminal conclusion.  To put it another way, a good life followed by extinction seems just not good enough for most and everyone wishes there's more and something else.  Rajanaka isn't here to dissuade you or deride your needs or attack your feelings.  Everyone has to tell the story she or he needs to hear just to make it through the day ---we need to be compassionate and gracious to peoples' beliefs.  And life itself is fraught with depth and mystery that leaves _all_ knowledge unfinished, incomplete, and partial.  What we don't know, can't know, and aren't going to find out is as real as all that we think we do.  What we can find out about ourselves is hard work and demands from us commitments to learning and practice, to criticism and painful evaluation.

One of the principles of Tantra has always been its various claims to secrecy and exclusivity.  There are initiations, secret mantras and decoder rings (like you get only from Cracker Jack), and other stuff that is supposed to make you feel Really Special.  You can even nowadays get Certified and use a Capital Letter too in words like Divine and Consciousness and think there are Tantric credentials and stuff.  Like you got something Really Special that somehow isn't what the rest of us already have but don't know it?  I'm not confused by the claims, just not all that interested.

So here is where Rajanaka wants to cut out the Lies that we tell and may even NEED to tell in politics because we need to get people's attention, more than just us.  Rajanaka thinks leveling with you is not necessarily something you want or will like.  Rajanaka doesn't want you not to have what you want or need.  So Rajanaka's idea of leveling with you may not be for you.  I'm kinda' thinking that if you are here and have tolerated these sorts of ideas this many years, you're more or less good with these sorts of ideas.

The Vedic world ---the one before all of the bondage and liberation models--- taught us to live healthy and prosperous lives, be generous and relentlessly committed to justice, decency, and compassion for all living things.  Who could disagree?  At death we return to the ocean of memories from which we emerged and what "survives" death is largely undiscussed.  Appa said that we won't remember our memories after death even as you become memory.  He was being nice, but what he was saying is that we don't survive death but in the form of living memories and information (like DNA) that we won't experience.  We're, umm, dead.  And that's not so bad, I mean you weren't too upset about not living _before_ you got here, right?

But as for these states or claims of any sort that somehow give you power _over_ suffering, exemption _from_ suffering, and then tell you you are somehow going to be immortal in ways that exempt you from death well, as far as Rajanaka is concerned: this is not leveling with people.  Leveling with people is not popular.  It has certainly not been a great business model.  It's easier to sell smoke, mirrors, and certificates. It's harder to love a life that is limited, mortal, and always conditioned, fersure.  It's not even religion to sell anything else, especially if you don't include some claim to the Big Enchilada ---call it enlightenment, whatever, it's liberation.

So if we are not free-from death, much less suffering, then what do we have to live for?  First, each other because you didn't get here alone, aren't alone, and you'll likely leave behind you plenty that bears your imprint.  Second, living to love this life is a complex, messy, unresolvable endeavor but oh so worth it.  There is beauty and nature, there are the astonishing achievements of human culture, from science to mythology and art, and there is your own heart's desire.  Whatever you think is your heart's desire, Rajanaka has a simple message: there's more, way more, always more than you have yet found in this mortal coil.  Stay in the conversation of exploration, never let up, ask every difficult question, and to fullest extent of your very being, try to level with yourself too.
Posted by dbrk at 3:06 PM