Our American Thanksgiving with A Side of Yoga

Happy Thanksgiving.
Thanksgiving is perhaps our most American of holidays, even more so than the 4th of July. This is because it is as much an invention of mythologies that we use to conceal our more complex and painful truths as it is an expression of simple and genuine human possibilities. We gather not to claim freedom but in undissembling acknowledgment that life shared is itself a grateful wonder. 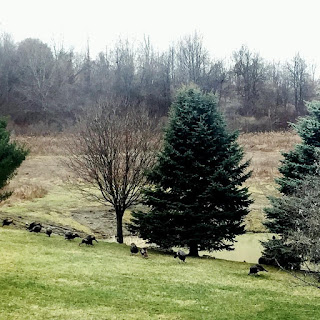 If Franklin had had his way and the turkey had become our national symbol I somehow doubt this naturally patrician creature would have become our national food. Would we really eat the symbol that means to capture our lofty collective imagination? Instead we have the President “pardon” one in a ritual that reminds us that that could be any of us, or at least most of us but those powerful enough to pardon themselves.

Among the first generation immigrant American families that I know, Thanksgiving is nearly always their favorite holiday, no matter what other religious or birthplace remembrance warrants sentiment or honor. Whatever you eat, this holiday is about sharing food, and that might be so human an endeavor that we couldn’t even be without it. Freud was wrong, you know. Sex is not the first category that defines us. It is food.

The Veda proclaims in both celebration and guileless reflection, “The eater of food and food indeed are everything here.” (Shatapata Brahmana, 11.1.6.19, for those in graduate school.) This is no mere culinary metaphor, I submit to you. This is a description of life organizing itself around our most primal terms dehi me dadami te, “give to me, I give to you,” (Taittiriya Samhita, 1.8.4.1), or as Ovid put it, “dō ut dēs,” “I give so that you give.” We summon the deities for favor. We eat and unlike the fishes, we are not meant to each other.

The contrast in Sanskrit could not be clearer, “give to me, I give to you” is decidedly not the matsya-nyaya, the law of fish-eat-fish. We are called to something better in order to be human. In the beginning when the creator god Prajapati was fatigued from his battles with death and the demonic, he asked for food. As the Brahmana further declares, “Therefore even now when one who is afflicted gets better he asks for food. Then they are hopeful for him [thinking], 'He asks for food; he will live' " (SB 8.5.2.1). (Gratitude for B.K. Smith for the reference here.) Food is more than mere necessity, it is life itself. But it can be more than that too.

I think this is because to eat together, perhaps with friends or strangers, requires a moment of truce, a momentary détente that places long-standing grievance and simmering discord on hold in favor of more liminal understanding. We can’t really turn these situations into more than a moratorium on our wounds because food doesn’t mean reconciliation. Everything that nourishes also wounds. Even if food also needs to be a form of care and more than an intermission within a life of work and toil, food rarely solves problems as much as it raises issues.

If you are, in truth, not at peace today but holding an armistice party with at least some of the day’s participants, I wish you all the dissembling decency you can muster as a way of making your way to the place of raging calm within. Keep your issues simmering, at least for today. If you are fortunate enough to share company in which there is only the usual human tumult and jangle, then we might consider more about our thanksgiving.

So just two more matters of the mind here to offer a little food for the soul.

First, food is wealth and a successful meal is not only the hero and heorine’s reward, it may be the very evidence of their extraordinary effort and victory. Gratitude to those who cook and clean. The ones who live, eat. The rest may receive their pardon but to go hungry is suffer. Personally, I doubt we will see the Trumps serving it up at a food pantry today as we did the Obamas and Bushes. We live in more troubled times and we should expect that from the way food is a spoil of victory when it could be instead an expression of collective values. I hope we come together today understanding more deeply how much we need to create these values. Let us make the wealth of food something we never hoard but instead offer as gratitude in a world in which too few share life’s bounty.

This leads us to our second point. Food is power, and there are winners and losers here too. The Sanskrit tells us that “everything here lives on food.” (SB, 7.5.1.20) and the Taiitiriya Upanisad (2.2) puts the matter beautifully, starkly, clearly: “They who live on earth, live by food alone, and in the end they return to it.” One way or another, no matter how carefully you tread or how principled your choices, something died today so that you could eat. Few celebrations of life demand that we celebrate with death, but food leaves us no choice. Those with power can share it or, eventually, have it taken from them, which leads us back for one last look at our American Thanksgiving.

Thanksgiving deescalates our feuds around a meal and a day and asks of the company we share to be good company on this day. We will be lulled to sleep from shared abundance and hopefully warm pie. We will need endurance and generosity, sometimes just to make it through the event and, under the very best of circumstances, because we hope it does not end.

But, of course, we know it must, not so that we can go consume the next thing in our law of the fishes society but so that we can perhaps remember that what we need, what we demand ---give to me--- comes with a far richer calling, one befitting a holiday of gratitude. It comes with “I give to you.” Make rage a giving heart and suddenly the world becomes a better place. I am grateful for how you have made that clearer still to me over this past year. May we gather again and again to offer and to receive all that is needed, valued, and powerfully life-affirming in a world that shares its bounty.