"But who are the gods?", The Company You Long to Keep

I've been paging through notebooks today, remembering conversations with Appa. It's one of those days in the year where I like to remember the sound of his voice. Of course, that'd be everyday but today's a little different. I made a point of trying not to miss the Gurupurnima. I would drop everything to go to India for this day. I read from this diary once at summer camp when my old friend Primo asked to come into my office at home and have a look. This is some of that. 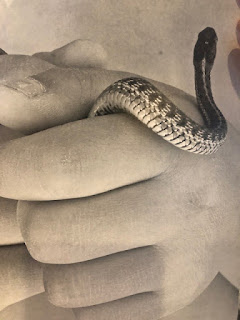 Appa would talk about the conversations he had that made him think and feel and reflect again. He never tired to telling me how life is fragile but that our soul is not. Our soul is made of courage, which is itself no virtue but a gift of life to life. How is that? Because our soul emerges from the deepest desire _to live_, to carry forward, to dream, to gather something of value from the gift of embodiment.

I have very few recordings of him because he preferred that I take notes. But I have dozens of notebooks. You had to coax him sometimes to explain a bit more---he was keen on you figuring it out yourself. But sometimes sutras would open up into ideas that could just change everything. These comments come from a long conversation about steadiness, uncertainty, fear, and how we know when we have met the gods.

"It is not what I say that will have its effect on you. It is what you have heard. You may write some of my words but it will be in your memories, and that will go far more deeply. You should take notes but not because you need to be afraid that you will forget. What is true will reach more deeply than all of our abilities to remember in words, no matter how we record them. What matters most goes inside and that is where the next conversation happens, the one you will need to have with yourself. So, try to remember that when you take notes or when you return to your notes later."

"How do we hold steady in the presence of uncertainty? Doesn't uncertainty undermine our steadiness?"

"Uncertainty is no adversary but it has some dangerous companions. When uncertainty makes fear a partner then the two of them can't be seen as two. Their oneness will cause them to haunt the soul rather than enter into the conversation. Fear's dominance leaves us feeling alone because it is fear's job, it's purpose is to enter into these conversations. But then we allow the heart to hide behind these important human experiences, like uncertainty. Uncertainty that acknowledges fear's presence means that fear can no longer hide, that it can no longer act like some monster coming from out of the dark. But you have to call upon your friend uncertainty to invite fear into the room, into the light of awareness. Fear prefers the shadows where it can stalk you. But fear is not the enemy. Fear becomes the enemy when we refuse it, when we fail to admit that it is part of these other experiences too. Fear will try to contend for being first with you, it will come out from those hidden places because you did not consider it a guest. The soul is the sovereign who must invite fear to be a guest at the table, not its lord. It's rather easy to treat fear as an adversary. That is because you gave it no seat at the table for the greater conversation. You don't believe it belongs there. But uncertainty knows better when it is in the company of the soul, in the presence of the gods."

"Fear tells you to fear who you are. It tells you to distrust your soul. But the soul knows fear because when courage is present then fear will not be left alone to do its mischief. When fear is alone we will become fear. But when the soul speaks out, and invites all of its guests, there is no such aloneness, isolation cannot take hold, there is instead a larger conversation with all of the aspects of the self. That is what soul is, it is that conversation you have inside with the gods..."

But who are the gods?

"The gods are who you are, who you want to be, what you can be, what you could be. They reside in the questions you want to ask even though you might be too afraid to ask the most helpful questions or don't know those questions. So the gods appear as courage, as the heart's true questions. Fear will create a false boundary while the gods provide a true support, the steadiness you need to stand in uncertainty. When you can stand there, then you can take the next step and the next---from that place where you hold steady in the presence of uncertainty. This is how you get to soul questions."

"Fear loves uncertainty because that is how fear becomes certainty. But the soul reaches out to you when you step towards those voices inside, where the gods are. Those are your voices, and they aren't what I want you to be or your parents or what society says you should be. Those are the gods' voices that not more or less than you asking for more from a world that promises little but may give you the chance to ask for what you want from life."
Posted by dbrk at 8:49 PM