A Note about Cultural Appropriation Since Nearly Forever 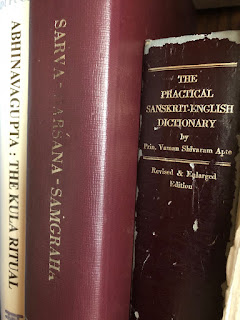 In 404 C.E. or thereabouts a Buddhist monk named Kumarajiva was abducted at the command of the Chinese emperor and forced to spend the rest of his life in exile from his native land, his personal freedom restricted. He was tasked to translate texts from Sanskrit and other central Asian languages into Chinese. Kumarajiva was apparently of Chinese and Central Asian parentage and possessed unusual fluency in languages and culture.  His translations of the Lotus Sutra and other principal works of the Mahayana canon---nearly all of which came from sources composed in India, in Indian languages, and translated along the Silk Roads into other central Asian languages---shaped the course of Chinese Buddhism.

Most of these "original” Indian sources did not survive in India---but did survive in translations because Tibetans, Chinese, and others “appropriated” them. I once spent a good bit of time working these texts back into the "original" Sanskrit in an effort to understand what they might be saying in English. In turn, many of these same sources moved from Chinese translations into Vietnamese, Korean, and Japanese, again usually by the efforts of Buddhist missionaries and canon-seeking appropriators. Everyone in this story is taking something from someone and making it their own.  They are changing things too.  They aren't always "faithful" to the originals.  Not by a long shot.  They are doing what they want with them every step of the way.

What all of these folks wanted over the course of many centuries were resources: ideas, values, practices, images, art, literature, and culture that they did not “invent” nor could they claim to be their own. They appropriated. They begged, borrowed, stole, kidnapped, bargained, bought, sold, plagiarized, sometimes were caught giving back to those they appropriated from, and often times not. They occasionally honored and coveted such work because they cared deeply and other times they were little more than grifting and profiteering. The history of civilization is the history of appropriations, for better and for worse. There is power and privilege, privation and exploitation everywhere we look. What we see today is neither strange nor new. It might be a step too far to ask but where would we be without it?

Sir Aurel Stein, a philologist of real accomplishment, was also party to stealing the great fresco wall-paintings at the caves of Tung-huang in China. Those stolen paintings hanging in Europe are the only ones that now survive because the Chinese Red Guard destroyed the remaining in situ cave paintings during one of their cultural revolutions. Hundreds of manuscripts in the Sanskrit tradition still exist today because western scholars cared enough to copy them, steal them, borrow them, and share them and no one in their right mind with an honest assessment of history believes this material would have survived if the colonialist scholars had not taken an interest. Those bent upon denouncing these colonialist interests in the Sanskrit language often seem just as disinterested in actually learning it.  So it goes. The world is complicated place. There’s plenty of blame and censure to go around. What we count as virtue when there is this much pain from the past and present could well invite more future collaboration and reconciliation. Motives matter and the past can’t be changed. But I can guarantee you that the world ahead is in for at least as much “cultural appropriation” as it has ever been. What is at stake is how we decide to share resources we all want, no matter our motives.

I’ll take this right to the limit too. Without cultural appropriation where would we be? There’d be no rock n’ roll, no Beatles and no “British invasion.” Little Walter was learning and covering Stones’ songs while they were covering his past work. Didn’t Queen Aretha sing about being a natural woman while Carole King and Gerry Goffin wept in pride for their composition? Personally speaking, I would be even more upset about this than even the losses within my chosen profession had there been no “cultural appropriation.”  For the past forty years I have worked hard to learn everything I can about the religions and languages of south Asian and have been teaching those subjects for more thirty years at University.  It’s a profession to learn about history, culture, and related materials and I’ve been compensated for what I know.  Do you teach yoga too?  I’ve tried too to give back in money, time, effort, and love and I’ve been roundly blessed and cursed for that too. I’ve meant to be sympathetic and serious, to commend and condemn when it seemed right; to support and to criticize because that’s an honest thing to do. There have been successes and failures. We’re all trying to figure out right from wrong; we’re all liable to err and some even try to learn from their mistakes. We might have to beg, borrow, steal, buy and sell some of our soul to do those things too. If we’re trying to do good we pay forward, we try to give more than we take, and make sure those around us leave better off than they came. But what’s fair value? What’s fair?  We could talk about that.

As we seek deeper forms of collaboration built on respect and differences of opinion, there will undoubtedly be disagreements and contest. The powerful will need to relinquish some power and share more honestly their privileges and perks. In academia I think we can say that that pursuit of justice is at least underway. There are no guarantees of success and we could just as easily go backward. America is in the midst of that very regression into tribalism as I write. But we will need to be more willing to understand the complexities of civilization-in-the making when others “take” or “use” or “want” our “stuff.” If we are going to live in greater global conversation, we need to be prepared to be offended by speech, by other people’s actions and intentions and religions and whatever it is they do, and so be prepared too that we will offend and be found wanting in our own desires and aims. The alternatives are far less appealing if we decide to cut ourselves off, lock ourselves in, or try to suppress the processes of civilization.

I would rather risk being offensive and to be offended by someone’s speech or beliefs than live under censorship and tyranny. But of course, one person’s justice is another’s oppression. Are we so incapable of seeing another’s point of view? As much as we appropriate from one another, we share in the gifts of human imagination. What is art but the ability to move hearts and minds in the uncanny ways we share a common humanity? We’re going to need to figure out how to live with each other’s calumny and faults--- and how to act responsibly and pursue justice when we are violated and wronged. But be sure of this: we’ll all be appropriating, one way or another because humans learn from other humans. What is stake is character and decency and how we will offer respect to differences that both edify and defame will be the measure of our humanity.
Posted by dbrk at 3:20 PM