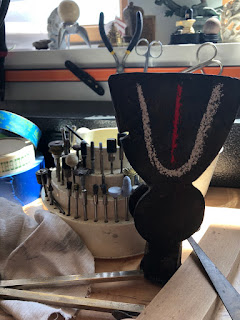 Rajanaka, Right as Rain
The Rest is Someone Else's Yoga

You may know all of this but so what. I may not give a hoot about my past or future lives---and even less about "liberation"--- but that doesn't mean I'm past repeating myself. None of us are. That's the point. Here's some simple Rajanaka for a Friday.

Yesterday's post featured a picture of shower cap boxes from Indian hotels---the singular common feature I have discovered. ALL hotels give you a shower cap. The _real_ reason is that you have come back as rain. And that's it, just as rain, less literally, more metaphorically. Let me explain.

I'm working on the Camps right now, particularly East, and other things, like finishing the Gita commentary are on simmer. What I love best about Rajanaka is how it dispatches certain claims or matters that otherwise dominate the conversations of yoga---that is, all traditions Hindu, Buddhist, Jain, even Sikh. So here is a bit of why Rajanaka is not quite like everyone else I can think of but is more like where things came from or, at least, with early Vedic worlds that invented the word "yoga."

To wit, Rajanaka gives no hoots nor pays much attention to two issues that, in some way or another, dominate all of the worlds of all other yogas: (1)recurrent death and (2) its end, its solution, which is better known as "realization," awakening, perfection, liberation, etc. Just how Rajanaka dispatches these is a bit nuanced but, um, not really. The result is an honest assessment: Rajanaka is close to complete heresy within all ordinary yoga contexts because it seizes (and stops) at Vedic goals. "Vedic" does not mean what Vedantins say in this case: Vedic means live, prosper if you can, die, repeat but without _really_ knowing you are repeating, just in the process of life...so live now, do good, and don't fuss for eternity.

First, about this whole samsara thing. Vedic worlds don't use this term and are not concerned as are the later traditions. To wit, everyone that lives dies and everything that is living came from life and so from death. How much _persists_ from death in the process is something most other traditions are keen to discuss---hence they wonder aloud about who you have been and who you will become, where you are going from _this_ birth forward. Rajanaka does not spend much time on those kinds of contemplations.

In the Veda you came from families, you die and go to the ancestors, and if you are lucky the living remember you (because that's a nice thing) and what happens next is that you literally return as rain. Put simply, does the rain know itself? So neither do you, you are the rain returning as rain, isn't that enough? Why do you think you have to be someone? You came from memories, you make memories, you become a memory---but largely it's about what you can do now, with this body and life, and the rest is just recurrence that makes _now_. So while others spend quite a bit of time using the ideas of the past and your post-death prospects to inform this life, Rajanaka spends its time on living now and leaving (most of) the rest to eternity. Indian texts use past births and future births to motivate, cajole, inform, invite, and direct the current birth. Rajanaka is less interested in this process as a source of psychological motivation. Materially this is a more interesting topic than ever given what we know (and do not yet) about the units of recurrence aka DNA.

Second, what happens at deaths past and present into the future is usually informed by claims of extrication, excision from the process, extinguishing the process itself (this is the literal meaning of "nirvana.") Rajanaka ignores this and so upsets the _reasons_ for yoga that others posit. To wit, _why_ are we enjoined to do all this stuff that, say, Patanjali says we should do to ourselves regarding the body, arresting thought, what we should think and think about? Well, it is for his kaivalya (only-ness) of the "experience" of an eternal self (atman) that is a feature of the eternity itself that is the changeless Purusha. Why does Shankara tell us we should study, we should fathom the "true knowledge" of the Veda? It's not to figure out how to grow rice or even get children to behave: it's to tell adults that they are immortal. Why does Kashmir Shaivism want us to see ourselves as Shiva? So that we can be ecstatic in our unconditioned Self that is invulnerable to the changes that are merely material comings and goings. Why do the god-lovers (bhaktas) go on pilgrimage? To obtain liberation and prosperity from the god's grace. In other words, all of these yoga traditions have some or another religious goal---and are explicit about how this goal informs what they tell us we should do everyday with our bodies, minds, thoughts, and relationships. Rajanaka keeps many of the practices---we like to do many of the things these traditions tell us will "liberate" us---for the sake of living a better life here and now. These practices improve living rather than advance us towards or result in liberation.

Thus, the Rajanaka hat. Rajanaka is not directed towards any such religious goals, that is, goals about _solving_ the human condition and arriving at some "real" finality. Rajanaka likes living, thinks it a strange blessing and an interesting chance, and focuses on living well---whatever that means. Rajanaka doesn't use any such ultimate goals---or any goals that are not merely conditional forms of living conditionally, mortally---to provide motivation or prospects.

To wit, Rajanaka is only about living a mortal life with wellness and prosperity in affirmation of all of its conditions. Rather than solve those conditions (i.e., end suffering, claim immunity, etc.), Rajanaka embraces our conditions---and without claiming there is anything more or further to gain. Live long, prosper, and it's really up to you to decide what "prosper" means. This is why Rajanaka is not so much a "Hindu" yoga as it is a kind of throw back to the Vedic life, which only hinted at death and rebirth (who can resist?) and had no notion of an unconditional goal or immortal relief. Live, love, die, rise as smoke, come back as rain. That's it.
Posted by dbrk at 10:33 AM