No one familiar with "yoga traditions" should have any reservations about just how close "guru" is to fascism. There is no sense in which the word "guru" is used that is not authoritarian even if your guru is love or yourself or some other warm and fuzzy feeling. We _want_ some authority over ourselves and admitting just how little we have or how precarious, fragile, and determined we must be to "hold the world together" is no small matter (in Skt., loka-samgraha, cf. Bhagavadgita, 2.20-23). 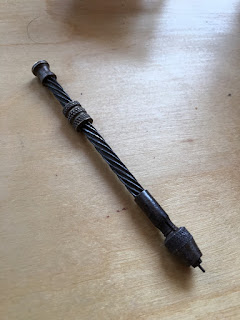 All of us have some part of us, some need to _feel_ saved from _something_. So even if you are the "guru within" and so somehow save yourself ("my guru is kindness", pick your soporific), it's still a call to command and resolve the human condition. The usual fatuous and grandiose claims about how it's up to you come quickly and the next thing you know we're asocial introverts ("go inside") or messianic do-gooders ("be the change you seek").

Since we are incapable of saving ourselves because there is no such salvation (it matters not what it's salvation _from_), we turn to the idea that _someone_ or _something_ (like "oneness" or "love") to do the impossible. What we don't really relish is the more sobering truth that all we really have are our wits, each other, and this complicated, risky, and painful mortal life. Don't mistake me, there's plenty of joy to be had, it's just that it's of temporal varieties. All we can really do is get up each day until we can't, hold ourselves together, and do what we can for others. When salvation-needs are projected onto politics it's all the more dangerous. Our salvation-desire from pain, from poverty, from unhappiness, from loss, from the ordinary, inescapable travail of being human is nothing new.

The "better" part of the +indefensible+ guru concept is to attribute it to an incontrovertible god who is not actually human. India has survived the real threats of guru despotism by simply having a lot of them so that everyone can have their own form of personal savior (anything will work: "love is my guru") with the result being a kind of Nash Equilibrium--- the really catastrophic political ends are defeated in advance.

But the "guru" is a con game because it takes your confidence, your need to trust and value your heart, and it uses it to satisfy its own needs or wants. There is little more insidious or useful to our human condition than the notion of "perfection." Perfection is static, atrophic, and debilitating, no matter how carefully we craft the idea or to whom we attribute it. But there's a more important point. Pursuing perfection in oneself is perfectly compatible with being wholly indifferent to others. This is true no matter how one proposes the journey ---be it "spiritual," political, or personal. To admit our own and others' imperfections may not go far enough that we are also able to admit that being human must be good enough. That "perfect" thing--- enlightenment, God, again, feel free to pick your soporific---will diminish our shared humanity because it places something above us. Above us is only sky and within us is a mortal self. To look "beyond" is tantamount to giving license to shame, guilt, and humiliation, as if those were intractable and fixed features of our character or somehow curses rather than limited assets and liabilities. There is a humanist alternative: to commit to being people of character, which may not require us to reject every notion of perfection but will demand we take a very hard look at what happens to us when we claim perfection as a truth.

Enter America's right wing and it's religious fifth column because it's all about the same needs and feelings that fuel our hopes and dreams, our desire to be saved, to be more than doing what we can:
*Albright warns us about impending American fascism and its threats (NYTimes)
*Goldberg reveals the depth of conspiracy theory on the right (NYTimes).
*Trump holds campaign rallies and it's not false that his approval ratings have indeed ticked up.

For Trump Scott Pruitt's only crime is that he has drawn attention to himself in ways that Trump reserves for himself. All the rest of the corruption, selfishness, and need for revenge, are fueled by a deep sense of entitlement and the fearless bluster that they are invulnerable to the law, rules, or any accountability. Pruitt might well be the otherwise perfect Trump appointee since he is so much like the puerile narcissist himself.

Jonathan Chait has argued that Democrats should run on corruption, that it will hurt the Republicans enough to win votes or dispirit their exurb supporters. Chait writes, “Historically, corruption — specifically, the use of power for personal gain — has played a central and even dominant role in American political discourse.” But Trump's goal is to normalize corruption, to claim that his status as leader, as guru, as savior, as "the only one who can fix it" exempts him. This is not a new claim. I'm not yet convinced that anything will penetrate the Evangelical Fifth Column's grievance based culture war and their support for their designated savior. And because those people are with him then Congress, and its current leadership, will remain silent and complicit in any corruption.

Our best hope may seem more cynical than we should tolerate: the Republicans may have to succeed in ruining the country with debt, environmental deregulation, wealth redistribution, trade policy, and war before we rid ourselves of their committed nihilism. Democrats could win the House but it's more telling that they can't or are very unlikely to win the Senate. If we think that Republicans could not pick up Senate seats we underestimate how divided America really is. So the question that remains for me is this: will there be enough of the experiment in democracy remaining once the effect of Republican failures send rural and suburban whites into further desperation and failure, or will that only lead them to pursue more authoritarianism.
Posted by dbrk at 11:37 AM