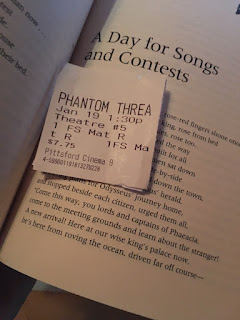 I collect memories, among other things. Pretty much nearly all things. I don't have a problem with "things." I openly admit to liking "nice things" though I often doubt my adhikāra to have them. I might be unqualified for some nice things ---either because I know I can't afford them or because I will certain stain that white t-shirt the day I wear it. I might also be making you already uncomfortable with "things" and "keeping" but there are lots of ways to live and love. Tolerance isn't about liking what someone else does, it's about dealing with it.

When I mention something like keeping a this or that, my wife Susan coughs uncomfortably and whispers, "Hoarder..." She has a point. It's hard for me to part with things that matter to me. A _lot_ matters to me. Things, little things, seemingly inconsequential things, memory things and material things are often ways I keep track. Of course, lots of folks purge or take up Zen or act out their inner Protestant unconsciously because it's so very American to do that ---that part of you that thinks everything must go, throw it out, buy only Scandinavian or Shaker furniture, eat raw, leave no trace, no things.

Renunciate yogas have always been the most popular in the West--- Vedanta, most Buddhisms--- precisely because they are shadow forms of our collective Protestant past. We are being told without our consent that possession is a problem to solve. Let me make this more uncomfortable: I think of most interpretations of "Kashmir Shaivism" and "Tantra" as shadow consolations for trying to stay in the world with things but telling yourself that things aren't really things at all. I'm not buying it. Things matter because we too are thing in the world. If you want to reduce that to your consciousness, go ahead. You're still in the business of collecting so long as you are alive. What in the world matters to you? What do you want to want? Those are question swe can ask and revisit, and collect. How _you_ answer that question is what I think _your_ yoga is about. If you want less, go for it. Collect your selves as you see fit.

I call this empty-is-better view the murti-free existence and, personally, I want nothing to do with it. I have 330 Million gods, goddesses, demons, and demigods, at the very least. Everyday there are more. I'm also sentimental to the core and as I get older even a bit nostalgic. I'm wary of nostalgia in ways I am not of sentiment. Sentiments are pretty much all we got. The best part of nostalgia is that it invokes a certain kind of pain and lamentation into the mix of loss and the past. I'm good with that. I'm not trying to "get over" my losses. I know I have room for those too. I'm not looking to "go back" so much as "make room." There's always more room. More mind, more feeling, more soul, more music, more art, more memories.

So I keep things, usually as memories. Ticket stubs, notes and postcards, I rip off the color codes on the bottom of cereal boxes that I really like ---the color codes, not the cereal. It's a good thing we have a barn. I give a lot of stuff away and even sell stuff. Meh. It's about the memories and the people and the gods. Oftentimes giving away things is the best part of having them. Give away the good stuff, not the left overs. That's a fine teaching of a god called Ucchista Ganapati, another story.

Like I said, rarely do I have the thought that I want to "go back" to some way anything was before. That strikes me as a simple violation of the arrow of time and my deep distaste for wishing for a world that can't be and the fact that there are no do overs or take backs. This is at the heart of the paradox to embrace too. Time waits for no one, says Rishi Mick, and we need to move forward to learn from mistakes and continue to grow. There's just too much that I haven't yet collected that I need to get to. I haven't read all of that French Lit that I love or every last word of every Platonic dialogue or every single line of 99,000 lines of Mahabharata in Sanskrit. I'm working on it. I got _more_ stuff to collect every single day.

For those of you who think this isn't "yogic" or "spiritual", I would merely respond that your tastes for abnegation and renunciation do not, in fact, describe the whole of "yoga traditions." I'm still collecting darshan ---see that piece I wrote from the other day---and there's _no end to that_. There's only _more_ darshan. Seeing, being seen, repeat. You'll have the rest of eternity for oneness aka being dead.

Darshan isn't a check list; it's about how there isn't really one of anything. If there were only one then you wouldn't experience anything you could call experience. I leave that to mystics, I'm not interested. But I do think you collect lots of ones. Darshan is not "I've been to that temple, seen that god..." It's not a trip, it's pilgrimage: go, see, return, repeat. It's not a check list or a bucket list. It's the idea that doing it again--- what "it" is for you--- is what makes you human.

Darshan is how you collect your body, mind, your soul and drive into one moment for just a moment. Repeat. Recurse. Let that moment be an invitation to the next moment when one thing only matters to you. Then let go and let all the rest matter to you--- because that's a normal life--- and you'll be ready for darshan again because there's nothing more uncomfortable than having to rewrite a memory that insists on bringing the all of you to the experience.

Samadhi with your eyes open is not supposed to be a permanent state or a one time happening. It's supposed to be all the forms of time, the punctiliar, linear, repetitive, and recursive: these being the four simplest ways to talk about the experience of embodying time. But that's another story. Experiences to collect should be things that you love and that cause movement, jostling inside, often causing some real discomfort or awakening of a shadow. We can't learn unless we are willing to be moved and that includes in ways that upset the entire apple cart of being. That process doesn't guarantee we will learn but learning doesn't happen without it just sayin' yo.

So the other day, Susan and I, inveterate homebodies, extroverted introverts, and vice-versas, went to see the new Daniel Day-Lewis movie, Phantom Thread. I would watch Day-Lewis read the back of his morning cereal box and find that interesting, so the movie as plot, etc., could matter less to me. Day-Lewis darshan is a story and a moment unto itself. But it could have been a really horrible movie it wouldn't have mattered because it was also just a thing we did, a memory. I didn't keep the receipt from the fast food joint that provided our repast afterwards, that being a step too far. What exactly is a step too far? Good question. Actually walking out of the theatre I apparently dropped the ticket stub and a kind person stopped me to ask if I'd dropped something. Right next to a trash can. I said thank you and put the stub in my pocket.

When we got home I took the ticket stub and I put it in a _second_ copy (or is it a third?) of Fagles' Odyssey translation. Maybe someday I will open that book again, long after I've forgotten about leaving it there, and I will remember the day, the date, the movie, the weather, life. Phantom threads of memory are darshan of another kind. Whoever gets all of these books after I'm gone is going to find a lot of stuff inside them.