Art, the Artist, Truth, and the Liar: Finding the Space of In-Between

I have been unburdened by fear of "the boss" for many years now and have tried to use that power and privilege to pay it forward. Tenured University professors can do some good in the world by standing with the less powerful and doing their level best to speak the truth. When someone with my privilege violates a basic moral code of decency or uses power for far less noble ends then the foundations of trust as well as the very notion of honest standards are undermined. When we know there is no equality then where is equity? We don't, in truth, want equality since that would reduce everything to sameness. We want equity, and that is value judgment of fairness. And what is that? 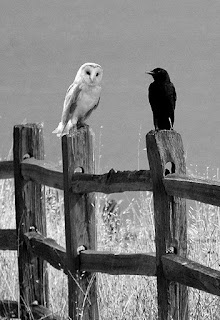 We must revise systems that confer privilege but create inequities of opportunity. But no matter how that privilege has been won it should remain contentious and conflicting for us: how to separate or distinguish the work from the worker, the message from the messenger, the art from the artist, the truth from the one delivering it who may be in so many other respects a liar. We're going to have to create a field for that possibility and a method for occupying such a field with integrity and seriousness.

The list of failed human beings ---failed by hypocrisy, deed, the grave disparity between what they may have accomplished and how they live or lived will include all of us. Let's rid ourselves of the immaculate saint or, worse, the attribution of moral superiority itself. I can think of few more insidious beliefs than the attribution of saintliness to yet another one among us. This is not to cast everyone so much the sinner as it is to say that to fail is to be human ---and that the greatest things ever accomplished came through the alleyways and down the main thoroughfares of failure.

It is particularly disheartening, of course, when moral failure particularly taints an object of great value ---Picasso as a person, Picasso's art. Chuck Close is the latest in the list of reprovables whose work is now the subject of censure and even removal from public galleries. The ethics police may have done their job, the Law and Order franchise produces its justice but when the outcome means that we no longer have the art, the work, the creation of value because the artist or creator is deeply flawed, then perhaps we have lost more than we have gained. It's impossible to separate the creation from its creator so instead we must learn to live in the field that exists between them--- at the boundaries and in the middle, all at once.

It is no small matter that Jefferson was a slave holder, a liar, and by nearly any standard of our age a rapist ---and that he wrote (most of) the immortal words of the American Declaration. What are we without those words and ideals? What are we with the shadow of Jefferson, if we are wise enough to take that seriously too? And there are no immortal words without those shadows. Lincoln too came too slowly to the abolitionist's moral clarity but would have America reached any new birth of freedom in the form of the 13th Amendment had he been less morally corrupt? Might not the inexcusable scourge remained even longer had he not charted a course of corrupted pragmatism? Let us add that he seemed adroitly aware of his corruption and hypocrisy. How that must have troubled his heart, no? I try to imagine what it was like to bear that burden of lies and moral corruption when the pursuit of decency and truth was so troubled, so incomplete and fraught with irreconcilable facts.

If we are unable to distinguish the value of the art, the value of the work, or even the truth that is so important to us _in_ the work from their deeply flawed human creators, what is left? How do we deal with this? What would the museums and library shelves of the world look like if every hypocrite or moral failure were purged? It's easier somehow to castigate the political where corruption can be understood as part of the job description. 'Tis messy business this being human.

So what do we do when our teachers fail us and the teachings remain valuable? The inevitable "it is great but..." conversation begins, of course, and how is that helpful when there is no possible righting of the situation?

This is why Rajanaka tells the stories of the gods and demons the way we do, where Shiva and Parvati and the lot of them do indeed disappoint, fail, and reveal their own shadows, regrets, and awkward remediations. They can't fix themselves either, nor are they redeemed by something else like karma or liberation or innate perfection however much the traditions would prefer this sort of bypass. And indeed everyone wants a pass, no one wants to believe that the immaculate or the perfect or at least the fixable and the learnable will not carry the day. What is god but a fixation on the impossible that we must claim for ourselves, for better and for worse.

But the greatness of the myths is that we can be sure that when Shiva or Hanuman or even Rama screws up, then takes the error to heart, and works with the process that they will screw it up _again_. However much is learned from a mistake, it's usually made again or then some other one. Imperfection knows no end and perfection has no beginning. I find some strange consolation in such imperfect gods because the perfect has proven that much more unhelpful.

Rajanaka's teaching was Appa's first teaching to me: "If you like, you can come back tomorrow..." And so it was every single day we sat together. Sure, there were prospects for improvement and even genuine transformation, relief, rectification, and lessons well-learned. But the task was more than learning from mistakes or admitting that we are always in perpetual conflict between our ideals and our manifestation. Rajanaka teaches that the space of incongruity, the field that appears because of the irresolvable and inevitable recurrence of disconnection is the field of yoga, the field of connection. In other words, it is to inhabit that field of alterity where the conflict will necessarily define the field itself that makes us consider what we can do and who we want to be. To return to that dissimilarity between who we want to be and who we are: day after day and in story after story, that is what we need to do. Our effort is the process that sees the inevitable disconnection as a resource of deeper connection.

What must Jefferson have had to do to have endured, denied, addressed or refused to when he took the seat of his own heart? I struggle to imagine his inner pain and I wonder if it hurt so much that he had to deny it just to survive himself. How do any of us _live with ourselves_ when the struggle is real no matter how honestly or dishonestly we are living the truth within this space of incongruity and dissonance? In Rajanaka the "midline" opens and expands not only to drive us towards a greater sense of value but to compel us to occupy the place of our true dissonance, our always unfinished business of holding the world together (what is called loka-samgraha in Sanskrit). If we are not actually struggling and if this project of the midline's volatility is not our daily bread, we are likely not casting enough light on the shadow or being honest enough to the pursuit of virtue.

That place where we don't live up to what we could be is a moving target; it's never the same even for a moment, no matter how much of the same feelings seem to reoccupy that same space again and again. Feelings like fear, regret, jealous, shame, all of which are so challenging to treat as assets rather then mere liabilities. To engage that disproportion and asymmetry, to pause and gain sight of it, to create some perspective, and try to see just a bit more clearly what will never come fully into focus, we call that sarpa-drshti, or the "serpent vision." We are at once that serpent and we are its hamsa, it's nature adversarial predator. Put mythically, we're both snakes and birds, and there's more there to consider.

It is (a)ham is "I" and "sa" is "that", what is unseen is both the beginning ("a" the unseen first letter that is the first Sanskrit letter) and it is the object of our reflections, it is "that" (sah). If that was a bit confusing that's my fault. Suffice it to say, we are the creator and destroyer of all of the selves we need to see the next, the broken, or missing self. But that we must do. The tools are mythology and poetry, science and ritual, bodies, minds, and hearts engaged. The key to the yoga of such an engagement is just that: stay engaged, let the next story come, return again to the field that holds the disparities that confuse and challenge you.

I want to know everyday how it feels to hold together a world that cannot help but break again so it can continue to move and create light that invariably makes shadow because I want to burn more brightly. There will be no art then without failure or flaw; no poetry that ascends that does not fall; no truth that remains pure if what we want is to grow the truth. Moving like the serpent means we can learn to go _anywhere_. Learning the stillness of the serpent allows us to find the field of movement where nothing is immune to the outrageous fortunes that define the mortal condition. More soon, much more.
Posted by dbrk at 6:38 PM