How We Learned Together

These are the weeks in April when I celebrate my teacher’s birthday, remember his teaching, rejoice in his life, and grieve his passing.  I’ve tried over the years to describe what it was like learning with him.  Today I was reviewing some very old notebooks, more like log books of times spent in India with Appa.  This transcribed passage is from my 22 year old self, dated April 1978:

There is nothing to prove, nothing even on offer.  It is simply here.  If you want *it* you will have to notice it and its value.  If you want it you will have to understand how to get it.  If you expect anything from the teacher other than what he does  you have not yet understood the opportunity.  There is nothing  for sale though he may make the opportunity appear.  If you don’t understand  all of the terms under which all of this happens that too is not going to be explained.  You are going to have to figure out what you want and then figure out how it is being offered because it is not being offered.  it is simply being done.

We might think when people do something or make something that their work will also somehow be on offer.  The work might be for sale or for hire, or it might even be for free because that too can appear to be the offer. 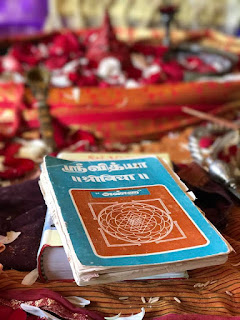 When I encountered my teacher it seemed to me at first that what he had chosen to do with his life and what he accomplished was somehow on offer.  He had studied, he had credentials, experience, and a long history of engagement with his work.  What would I have to say to receive or do to acquire that ?

He never once asked for terms nor did he set conditions or a price, not even after I gathered the courage to ask him to teach me about his work.

He wasn’t offering something of great value for “free.”  Every moment of life is one less moment we have to live and from mere respect for time we should consider seriously questions of value.  He did not put a price on his time or his work but did make himself available.  How do you pay for someone’s true experience or repay a debt that seems beyond any measurable compensation?

It’s not wrong or wrong-headed to consider monetary value on value received.  In fact, it seems to me wrong to think that we would not somehow try to make compensation, offer some kind of remuneration.  If none is suggested, none asked for, that doesn’t mean the work is “free” any more than we are freed from the notion of just rewards or offerings.  Things of value can have a price no matter who decides it.  If we are not prepared or willing or can’t pay that price then that is merely another life circumstance.

When I started my journey all I knew is that my curiosities had somehow brought me to a complex body of images and suggestions, into words and ideas where one thing had led to another.  There was history, a subject and in fact many subjects, there was learning and clearly a process of acquiring skills and understandings.

Any of these endeavors would take time and involve remaining a person in the world with responsibilities and ordinary costs of living.  None of those matters were ever going to simply disappear---that is not my good fortune.  But what relationship we can we create between what we long to learn, who we want to be, and making a living in a world that promises us none?

I didn’t have a plan or a goal because I didn’t even know what it was that I had found.  I felt confident that what appeared seemed only the very tip of an iceberg and that the iceberg was unfathomably vast and genuinely beyond my abilities to fathom.  The subject involved complex ideas, implied arguments and materials that even at the surface level appeared exotic, unfamiliar, and labyrinthine.  I had no idea if these pursuits really were worth the time and whatever efforts they might entail.

I remember as a kid having heard in school that Albert Einstein had important theories.  So, I went to the library to get my hands on his work, copies of the original documents.  How better to learn?  Of course what I found was so utterly beyond my comprehension that I had to reconsider, well, everything  I thought I was trying to do.  Things worth doing are not only likely hard to learn but may well leave us wondering how even to start.  It wasn’t only what Einstein apparently knew, I couldn’t fathom what he was doing much less how he learned it.  Of course, he went to school, he had teachers, he applied himself.  This too seemed to be on offer if one has the curiosity, the aptitude, the commitment to the work.

But with respect to my teacher’s work, that can only partially be learned from things on offer because of the simple and practical fact that he worked as a University professor.  If I enrolled in his classes he was contracted and obliged to offer precisely what was expected.  I soon learned that his professional offerings were only fragments of what he had done but not what he could do, much less what he was doing.  What he offered as a “professional” was only a fragment of who he was and what might be learned.

What my teacher might teach if only I knew how to learn was never for sale and never went “on sale.”  What you might learn or receive from him was somehow available if you first understood those facts.

“It isn’t that what we might do together is intellectual or “spiritual” that matters about the work.  Nothing should cause us to believe our work is different from any other endeavor.  I might be making pottery or building furniture.  What would it matter?  What there is to do in life and how we choose to do, that may not have anything to do with one’s job.   One is somehow curious and interested in the work or not.  What is “produced” might be sold and those sales may provide a living.  One’s work as one’s artistry, can do many of the same things as any job and there is nothing wrong with having a job, making offerings or sales.  Some of the skills I have learned help provide my living.  Of course, people must find ways to sustain themselves.  But if someone wants to learn what I have learned there is no need for me to make an offer, though it might be available to learn.  My job, my profession, that is only a portion of myself, as it is for anyone.  Why should I want something from you that you have not asked of me?”

My teacher never said “this is what I do, this is who I am, would you like to learn this.”  He didn’t even imply as much.  He never spoke about the value of his work in his own experience, much less how others might benefit from it.  He expressed no attitude regarding accomplishment or objectives; there was no suggestion of profit, advancement, or gain.

When I asked him why he did his work he said it had come to him first as something curious, that it had somehow called to him and turned into a way of life.   He was now just doing his work.
Is it important?  Perhaps not to the world, he said.
Is it valuable?  So long as we try to avoid particular harm to the world then we should be free to live as we choose.
You don’t sell your work?  I make a living from work I do.

What I eventually came to realize is that I would have to learn how to ask for what was never being offered until I could ask for it.  At that point, the “offering” was commensurate to commitment and a process of learning how to ask the next question, about what seemed to be the next thing in the learning process.

Among my first lucky stumblings I came upon a quotation that said three-fourths of everything remains hidden, unknown, or unseen.  There were few clues to explain further the value or the purpose of the pursuit.  I had curiosity, even romance and mystery but that I realized was all of my own making---the clues uncovered expressed no particular interest in creating any interest.  There was no pitch, no seduction, no vending, no deal to be made, no demands, and nothing to market.  This situation was never less true so the very idea of something being on offer was actually never the case.  There was no interest expressed in eliciting my interest or anyone else’s.

If my teacher’s work were completely private, if no one had ever noticed or asked, I am confident that it would have made little difference to him.  If no one came along to carry forward his traditions of learning---what he knew was clearly passed through a process of learning---he wasn’t going to be concerned.  He felt no need to carry forward, spread, or advance any agenda.

He wasn’t doing his work so that others would profit from it though, he conceded when pressed, they might well find it meaningful and worthwhile.  After all, he did and that suggested others’ too might find it worthwhile.  That may sound selfish or self-preoccupied because there is no expressed motive of altruism or service to community but neither did he ask or expect benefit, reward, or acclaim.  If there was inspiration, influence, or an evocative muse, none was deliberate, none was being implied.  Once we engaged together in learning there were no obligations, no incentives, nothing expected.

So what happened was this: I found a person I had reason to believe knew something about matters of real curiosity to me.  I went to ask him a bit about what he knew and if he would teach me.  He respectfully listened, gave me his time, and at the end of our first “interview” he said that he would be here, at his desk, in this place tomorrow at certain hours.  Could I come to see him?  His affirmation was in his smile.  He wasn’t cold, haughty, or indifferent but neither was he particularly more inviting.  He was being himself, doing his work, and I could come or not.  This arrangement, as it were, was never made more complex or conditional.

It soon became clear that our relationship was entire, meaning that so long as I “showed up” he too would “show up” with all of his gifts and abilities.  I would ask for things and then be assigned tasks that would be in pursuit of those requests.  He never graded or evaluated.  Each day he would express or suggest things that were clearly in furtherance of my curiosities and the queries I was able to make. I was never praised or cajoled, never admonished or approved.  We simply continued our process day after day.  I never asked for “input” nor did I receive any assessments or valuations.  I was learning how to learn when there was nothing being offered or sold, no bargain, no requirements, no obligations.

I once asked him, while living in his house, what we would do if I did not come that day to learn together.  He said, “I hope we would at least have lunch” and he laughed a little.