Burn on, So Long as You Can

I was up early with the pup---she did some business, ate, played, and is in a cur-snooze. I was thinking about everything, which is somehow yer job when you finally figure out that you'd better get one. I write selfishly because I have to get it out and then figure out if it "goes out" in public. (Twice as much is never "published.") So here goes.
***

There is an ironic twist to self-evolution in the traditions of yoga. The more we engage to become that better version of ourselves, the more we must come to trems with living with who we are.

We can claim transcendence, that we have surpassed and relinquished our karmas, accumulated and no longer deciding for us, but is that the task? Are we getting past our past or moving forward because we have a past? 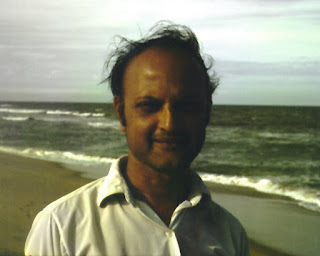 The option to take the bypass and claim that the different person we know ourselves to be is no longer the person that once was. But this is the mistake that will almost surely lead to less than who we could be if we are willing to receive into our ever-new self (Skt. abhinava-) the all of the self of light and shadow.

To invest in progress we have to allow who we have been to become a teacher to the artist we seek to become. In Rajanaka this is, in part, the relationship between the seated dancer Daksinamurti, the teacher, and Nataraja, the artist. One of the most important things that Nataraja shows us is that even our most exquisite artistry is an expression of the hard-won conversations with our shadows.

Instead of mere regret, contrition, and embarrassment, we have a chance to incorporate, literally, to put them in the body so we can connect more honestly, converse more deeply. The further we are willing to step into the darkness that follows, the more light the horizon of the self reveals.

The irony of our unfinished self is that it keeps us moving when we are at once supported and cajoled. No one likes to hear that we need some nudge, that we prefer complacency to being jostled or poked. It can feel like being you're being forced, bullied, or hustled. And it can actually be some or all of those wrong-headed and morally indefensible affronts to the self.

To feel the difference between the charge to act and being shoved is part of the challenge to keep moving. The alternative is a quiescence that is more empty than purposeful. Life itself may have offer no greater purpose but that is why we have to engage to create it.

We are at once called to become a better version of ourselves and that everything about this endeavor is an invitation to burn. That's the Sanskrit tapas. The purpose of making the burn burn is to remember that in the ancient world all light is heat. We burn for the sake of the light.

We can also seek to illumine for the sake of opening to the shadows. Those missing or broken pieces have always been present but too often are left unattended, whether they are before or behind us. It's easier to claim it's all behind us when it should be clear that what we are doing now that is so evidently success is our conversation with the need to engage all of ourselves, with shadows companions of awakening.

Let me say out loud what prompted this little sermon. (Personally I hate sermons but that's why I write them: to try not to hate them when I need to hear them and of course would prefer not to.) I was thinking about President Biden who now some sixty days into his term has not given a press conference. Joe has been in public service nearly his entire adult life and some 44 years in office. He's said and done so much in public that one could select evidence to suits whatever might be the preferred conclusion.

The reputed gaffe-machine however has not gaffed much at all and the strategy to avoid the insipid culture wars that Republicans would prefer (because they have nothing else) is leading to something of a quiet revolution. Much is proposed, important power has been delegated to persons who are not only capable but representative of real change.

Even Mitch is scared of what is coming, so scared he is threatening retaliation knowing he's lost the power he once wielded so ruthlessly. Biden won't be ruthless---that is not Rudra's way. He will howl and weep because he has bled and bleeds. He seems to have some sense of what it takes to make the ruddy into the auspicious.

I am not delivering beatitude, Joe is not beyond criticism, and he may fail. I think he knows this. I am sure I feel that same way about myself. But it's not fear that motivates. It's the understanding that you gotta keep your head in the game and rage on to make the wheels turn.

It's too early to tell if much of what is hoped for will be accomplished but it has led me to think that Joe has in fact learned from the past, both personally andprofessionally, that he burns and seeks to bring more light.

But the key to his wisdom---at least that is my projection---is that he has not forgotten his shadows, particularly his own losses which have alchemized his soul. He doesn't have a future that isn't present but rather a future he hopes to help others realize. He's no saint and may yet not prove "transformational" but there is something more than cleaver politics going on.

I think he wants to make a difference---and we so return to the irony that caught my attention this morning again. You gotta want to do the right thingand do the work to become a better version of yourself for others. We all have plenty of past to remind us what it feels like to stumble, hesitate, falter, tilt, and sometimes fall.

No one likes to do that again but we know we will. That's why we might actually stand a chance. I'm further along in life now. I don't yet see the light coming for me and I'm grateful for that. It will. There's more behind than ahead. But that's what now makes the yoga all the more important.
Posted by dbrk at 9:26 AM