Got Anxiety? Part 2, More About Anxiety as Asset and Liability

It's the end of the world and we know it and I feel fine? Maybe not. I am inclined to take on the prospect of America failing because if it does it fail it will be because more people voted for racism for whatever reasons than showed up not to resist it or because justice was stolen. Lots of things can go wrong. 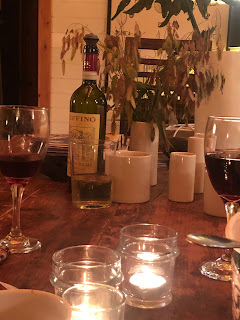 But I think today that Trump, along with the Senators and all the way down ballot, are going to face truly crushing defeat. However, Trumpism isn't going away nor the horrors that created it. What created it is smallness, certainty, and a genuine failure to appreciate how the world invites more complexity, never less. You would have to reduce to an issue or just reduce to say yes to Trumpism and that is entirely possible. Today (I mean TODAY) I'm feeling like that Trump will fail but most assuredly not the causes of Trumpism. If you're not nervous and upset about what could happen, I have no idea what planet you live on.

It's hand wringing, pearl clutching, angst, anxiety, ahi time. Ahi is another Sanskrit word for snake (naga) and serpent (sarpa). Possibilities like the truest human self are made by in large part by forces we don't control, didn't make, and and can't know. Add complexity and every effort to make the world simple, or reduce self to something essential (Vedanta), simple (more Vedanta or just plain unreflective), or non-existent (peskyB'ists again), we bump into Emerson reminding us that "a foolish consistency is the hobgoblin of little minds."

We may _think_ we like consistency or would love to embrace real certainty but such thoughts quickly and always become more problematic, to say nothing of being just plain wrong. The price of clarity is the similarly "satisfying" but wholly unproductive belief that there is somehow less world and real finality (i.e., no more) when of course that would be another short cliff leading to another long road. Worse, we say we got this when there is more, no end, and we don't actually got this yo.

Delusions can feel good. We may have _some_thing but not all. Life, like self, will permit us to sojourn briefly in our serene complacencies and assume whatever delusion of surety is today's soporific remedy. Whole religions (think: umm, yoga) are devoted to advancing the delusion that life has a solution.

But the myths know better. That ahi (n.b., YOU are that anxious serpent) inside you will wake up soon enough to remind you that if you don't embrace being that ahi, procure it, use it skillfully and with some effort remain engaged despite all of the concomitant terrors and inevitable horrors everything will get even worse not better.

In other words, if you are in touch with the trauma that is natural to the unknown, you stand a better chance than staring down that inner consciousness cobra, hood espeliering like the wisteria eating your house one vine at time that you don't really notice until you realize it is _really happening_. Then you can figure out what you can do rather than be destroyed by it.

There's no transcendence, cure, nirvana, or other exemption from the complexity of a self that refuses to be confined by a desire to contain it or reduce it to singularity. The plural self ever remains three-fourths hidden and we never get to encroach on that percentage precisely because the more we learn, the more self appears that we have yet to learn.

That was supposed to be the simple explanation of this situation of being human. Let me try again. If we recognize how our anxieties lead us to our hearts rather than away from them, we can love and grieve in ways that allows us to take the next steps, live to die another day, live to live with what is just true about a world we don't control. Less victim, more participant is the idea: dancing with your devils is better than letting them haunt you.
Posted by dbrk at 2:54 PM