Ayyappa, Ayyappa Vrata, and the Gift of Living A Brief Note About Pilgrimage as Practice 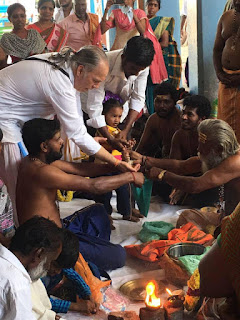 It's 12 days to India now. This morning I vowed Ayyappa. So a few words about what that means, at least to me. Pilgrimage seems like such a religious thing, such a construct of anachronism and folly, even cultural appropriation. And we all know how dangerous that is, personally, politically, one can hardly breathe without stealing or borrowing something. Not even the air that we breathe.

Pilgrimage seems so not of today but for the superstitious. For me it is anything but that, not because I am immune to superstition but because I want to think about life and need _more ways_ to think and feel being alive. So let's talk now about one of the gods, an important one in Rajanaka lore. Ayyappa you may have heard something about from me. Here's a bit more.

In linguist's terms the word "Ayyappa" is a compound back formation, which means it's made up of two words and, in this case, _which_ words is subconsciously, deliberately, or accidentally ambiguous.

First the easy part. The -pa ending can be both the Dravidian (Tamil, etc.) contraction of appa, meaning father, daddio, big cheese, that guy with a lot of affection because that's why it's shortened. It can also be the IE (Vedic, Sanskrit) verbal root /pa, meaning to protect, to guard (like the literal door guardians called "dvārapāla-s" and other comparable words). So if we take "Ayyappa" as a kind of manipravala (literally what we call a jewel-jewel word, mani is Skt for "jewel," "prabala" is Tamil (also likely a shared word or borrowed?) for coral=jewel, then it is a combination word using both Skt and Tamil and _that_ is also _another kind of_ sammelana, a commingling word (Skt concept) that uses multiple intimations and meanings assigned from two different languages (or more). We can discuss both maniprabala language and the rich, complex notion of sammelana further at another time. Just to be very brief "sammelana" is what makes Natarajar appear so masculine _and_ feminine and still _more_, other, broken, and wholly possessed of all of that, all at once. Got that?

The first part of the word "Ayya-" is similar as a jeweljewel sammelana, thus it could mean the Tamil "ayya" or "aiyar" which is an honorific of appa plus the deep Skt influence of arya being pronounced in Tamil. When a Tamil addresses a man, particularly older and respected, he is called "ayya" or "anna" for older brother, or ayyar where the extra -ar ending means to convey respect as in the nominative formation of Natarajar in Tamil. Thus Ayyappa means not only the god who you recognize as the "third son", the golden child, who is lord of ghosts and "learned in Dharma" (called in Skt "Dharmaśāsta), he is the respect we offer to the recognition of "protection." Let's move on to that idea.

One who protects is truly "learned in Dharma" in the true sense of all of Dharma's complexity regarding shadow and light: the very best of us fail, don't see all, can't finish knowledge, and all the rest that is hidden; the very best must make deeply compromising choices, make mistakes, and can't perfectly get it right. Mythically, of course, Ayyappa is the son of betrayal and of consoling love of his mother. He is the bastard son of Vishnu and Shiva. And most of what is said on the internet has little to do with the ways Rajanaka tells these stories. We'll have more time to tell more stories, including Ayyappa stories. Sometimes we call him Aiyannar. The words actually are not confusing but they are complex.

Dharma means that there is an armature of decency, character, and empowerment in creating meaningful boundaries and making difficult decisions with clarity, humility about "rightness," and wise reflection on the realities of unforeseen possibilities. Dharma tries to make good on a world that has not decided it is good or isn't good or is indifferent to goodness but for what we can make. "Studying" that is called śasana, being learned is called being a śasta, and such a state of wisdom takes provenance, time, study, reflection, failure, and continuing work.

Hence Ayyappa is Dharmaśasta. He is the warm, embracing protection that _respects_ the depth of Dharma as it holds us and keeps us safe in world that is never, ever safe, much less from ourselves. To respect respect itself is critical but Ayyappa is also feral, furious, the lord of ghosts, consorts with the darkness of the forest; as a child he is abandoned by his parents, raised by a tiger-pawed sage who is morphing into primal danger, and keeps the company of all that is imperiling and filled with risk, fugitive terror, subject to all that is capricious, unpredicted, stochastic, and relentlessly endangering.

Ayyappa is wild in the truest natural sense: primally aware but not always successful, keen to be instinctual but capable of that strange way humans alone (among things we know) can _learn_ but can't conquer. He resides most at home in the depths of the forest and the forest is the unconscious. Everything originates there, in the unconscious, and Ayyappa is present every step of the way towards every surface, revelation, appearance, and form. What does it look like when the furthest reaches of the unknown manifest? It looks like you.

Ayyappa is the place, the thought and feeling, the ways we connect to honoring, respecting the gift of a brief, mortal life that ends and begins. To become further attuned, to touch that source we go to our forest of feelings and into the great matrix of thought. We go to the places where he is she, she is them, all is, and where every difference is real and respected but where separation can never be so real that we are separate.

One thing is two and more, two and more reside in one, but two is never other to itself. Duck, rabbit, duckrabbit, etc. But to see is to try to see more. Because there is always more, there is no end, no liberation, no finality to learning and growth, there is death and in the meantime love and savor life. Truly, come to respect and protect and honor being given the gift of life---as far as you can, with power and privilege further paid forward. And so we honor, -pa, we protect, -pa, and we call it by the name we all hope to deserve "ayya," which then means that others see your character and your desire to do good and be good. "Ayya" is when people love you for what you have to offer, who you really are, it is when you are seen and acknowledged for being, just for being, and that is certainly good enough. Ayyappa means reveling in what is worthwhile and worthy, and that is your humanity itself.

So when we take on an Ayyappa vrata, a turn or vow to Ayyappa we try to create a context for those feelings, ideals, aspirations, and acknowledge that we are grateful to be alive. This means we will have to make ourselves _feel_ in body, mind, heart---and make ourselves touch what is uncomfortable, discomforting, extracting something from the "vow." What are you prepared to do about "it"? Whatever "it" you decide that to be? That is the nature of the vow. And the object of the vow is to become more Ayyappa, more of what it could mean.

Ayyappa has gender but no gender, more gender, less gender, any way and every way we are called to respect life, the fury all living things experience being _alive_. And then Ayyappa is all that acknowledges that life's treasure, it's gold, it's ghee and adornment, it's beauty and wonder is fragile and durable, powerful and vulnerable, the sammelana that happens when two things become three.

One and one is two in the worlds of śāstra (learning), one and one is three in worlds of poetry and myth (the poet is kavi, Ayyappa is called kaviraja, poetic sovereign), and then it all goes forward and back from there, without any required purpose, end, meaning, or goal. It just goes. Ayyappa asks who do you want to be, who do you imagine or wish you were, who are you---all at once.

So now 12 days before I breathe in India again, I take an Ayyappa vrata. This means I will demand a few things from my body, do and deny a few things to make me feel more, be a normal person outside and an Ayyappa inside. Until I reach India then I get to be just a little more Ayyappa on the outside too. Who do you want to be? What do you want from a brief, moral life? Ayyappa is not the answer and offers only answers but much more importantly is all of the questions. What questions do you ask? Could you? Can you? That is why you take an Ayyappa vrata.
Posted by dbrk at 12:36 PM