As If, You are Free


Freedom in practice usually finds its way to “freedom from” and “freedom to.” 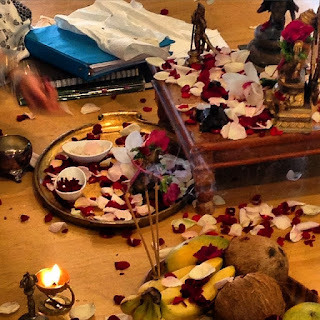 We seek to be free from some perceived imposition and free to act on the basis of choice.  In both cases there is an implicit suggestion of superiority and the consequence of isolation.  Why would we choose to demand our prerogative if we didn’t implicitly mean to demonstrate the superiority of our point of view.  Who holds an opinion they don’t believe to be true?  Our creed is, after all, where we place our heart (from the PIE compound *kerd-dhe; cf., Skt., shraddha) and that is sacred both in the no-fly-zone relationship-sense of permissions and prohibitions and in the ontological-sense of inviolability.   We draw boundaries, enter into agreements, take sides.


The issue is not merely our tacit or undeclared ascendency, but neither are we required us to address the consequence freedoms-expressed have on those who do not share the imperative of conviction.  No one likes to justify much less explain their most deeply held feelings.

Whether sacrality is how we address relationships by establishing meaningful boundaries or declare a certain something to be exceptional, we have come to the brink, to the place where the limits of tolerance meet the impasse of volition and articulation.  Something silencing and clamoring is simultaneously toiling for space in our hearts, whether or not it takes voice.  The sacred is what has made the cut and we believe ---or we want to believe and that might be as much the paradox---that we’ve found an anchor steadfast to the true bitter end, that part of the rope that stays inboard when the rest is released.  Sometimes we discover that that sacred is much more like ourselves: no better than we need to be to carry on, alas without an adamantine covenant that confers irrevocable tenability.  We wish for more no matter what we are receiving: this is part of what religion means, holding us together when we’re quite sure that we don’t.  What does? Who can?

When Arjuna asks Krsna why he comes into the world, Krsna tells him it is for loka-samgraha, to hold the world together or, more literally and so with ironic metaphor to “collect the light.”  (Bhagavadgita, 3.20) Whether or not we are looking to God, we are assuredly looking for light when darkness or occlusion means that we want more than we have collected.   It becomes much more difficult to defend Krsna’s admonitions to consequences he deems unsavory when those include claims to his own sovereign grandeur or the prevention of “miscegenation.”  Why not simply end the war and prevent the unwanted, ummm, mixing.  Terrible advice and unquestionably bad values.  But let us move with those problems rather than ignore them.  Freedom doesn’t include being right, it means the power to contest values in a contested world.  The alternative is compliance, submission, capitulation, or passivism.  The costs of all are unexceptional because they are inescapable.

In the faith (shraddha) that Krsna further purports will sustain us, he doesn’t mean we need to believe in more than we see, much less an invisible or beyond that will somehow come through for us---he is, after all, right there telling Arjuna he is the corporeal presence of that real authority.   Rather, he’s enjoining Arjuna to collect himself, and so to endure, to withstand the world’s viscidity because the world does indeed hold to its nature: why should we expect reality to be less than unfinished: that will have to be enough.  It will be enough, when we come to its terms, not ours.  Theists will dispute this reading of the Bhagavadgita because who wants to hear that even God isn’t entirely sure of what comes next?  We might also reply, who needs a God so committed at once to his own sublimity and yet so willing to condone the world’s miseries?  Is Krsna being instructive, telling Arjuna that this is what he needs to learn?  Or is he as much being mimetic, showing Arjuna what it will take to live in this kind of world?  Stand up, he says, it’s no time for indulging your doubts even if they are by definition a worthy enterprise, the kind of thinking that prevents too much certainty about the worlds’certainties.  You need to act sometimes only as if than rather indulge the cataclysmic authenticity that lamentably describes the world’s facts.

Václav Havel used to say this as if-ness made his life under tyranny bearable.  What doesn’t factor in Arjuna’s moment of certainty is faith in the sense of the belief-in-the-unseen or the delayed (as St. Paul would it have about seeing through a glass darkly and then face to face, 1 Corinthians 3.12ff.)  After all, the facts are right before his eyes and Krsna is directly pointing both at himself and to the world’s constancy.  Go with the evidence and then make your as if decisions.  It’s that constancy that requires putting your heart somewhere: we abide, sometimes to ride out the perpetual storm but more to fathom how it’s always storming.   We might take Aurelius to heart here for much the same point, “Nature equips rational beings with the same powers as herself. Just as nature works on whatever opposes or resists her, giving it a place in the order of things and making it a part of herself, so too can we convert our hindrances into material for our own ends.”

Certainty’s most cherished hope is security, the feeling that we are safe because life’s risks are unrelenting.  Hope can be a mistake.  Who wants to be reminded of that?  Perhaps then there is nothing more to certainty than the inexorable audacity to persevere.  In Arjuna’s case that includes no more loitering.  Acting is believing and belief is neither a mere prompt to act nor crutch upon which we can long lean.  We are free in this tempest’s perpetual disquiet only to countenance or refuse the imperative because there really is no place to hide.   We all live in each other’s worlds however much our exercise of freedom means to sequester us in self-made consecrations, in the fiction of harbors without waves.

When everyone is on the same side, such as it is, we are agreeing upon the difference such differences make.  When is expressing “freedom to” a demand that others comply with your preferred liberties?  When is compulsion the definition of “Church” when we seek to separate your Church from our State?  In America, this is no small potatoes.  Ask the Supreme Court.  And look here for some journalistic reflection: http://www.nytimes.com/2015/07/12/magazine/what-are-the-limits-of-religious-liberty.html?action=click&pgtype=Homepage&version=Moth-Visible&module=inside-nyt-region&region=inside-nyt-region&WT.nav=inside-nyt-region.

The State is the Church in many shared human affairs, if by that we mean the principal resource that matches conscience with compliance.  Whatever boundaries we create to delimit or assign responsibility, we protect our humanity by the ways we define such boundaries and mean to impose authority.  There is no statute of limitations for murder.  Our laws demand justice based on shared values and commitments. Our most sacred secular principle secures the necessity to debate the meaning of justice without invoking an irrefragable transcendental authority.  We must be responsible to each other and for our judgments, and especially those who believe they are answering to a higher authority, to their God.  Society means to impose the will of society, so help you God.  Holding out for an authority beyond our reach may be religion’s special claim to Church over State but this also leaves we humans not merely the arbiters but the voices of such supernal jurisdiction.  Maybe Krsna is right, we have met the gods and they are us.  We can be as wrong as he is about a great deal of convicted experience and still retain the ability to make it better.  How’s dem’apples?

Freedom means working within the rules we deem reasonable for all.  And there is no under estimating the tides of history even when the arc of justice does not bend, or at least not without coercion or with the certainty that it will not regress.  We might ask ourselves why it’s so important to learn the lessons of justice because religion makes no promises but to demand that convictions can overwrite history, which includes the possibility of dismissing evidence and ignoring reason.

The irony here should not be lost on us: if we didn’t overwrite our experience of nature and culture we would have no civilization or law, no humanitarian change or ethical evolution, no further consideration but to implement indifferent self-interest.   That does indeed appear to be some persons’ definition of their religion in that Orwellian sense in which recent “Religious Liberty” laws function as justifications for instantiated bigotry: your religious freedom is now a means to deny me what you freely grant yourselves as divinely sanctioned.

Our genes may indeed be selfish to objectives that carefully measure out doses of self-interested altruism, but equally perilous is compassion or forgiveness that ignores the consequences of conviction and the precedents of action.  We are only as free as we are able to endure another’s convictions imposed upon us with all the righteous claims that proffer security and certainty procured.  The world might instead offer us the storm we sail to its bitter end.  It’s the meaning of “bitter” that we must unceasingly reconsider: how is it that last bit of rope, the knot that holds our anchor on board, or another’s amaroidal truth?