Before the Storm: Candid and Innocent, Neither Cynical nor Optimistic

Fending off the demons will be no small matter for the coming week. The demons will be your own---the worry, the fear, the anxiety that is not unwarranted or false. They will also be real and out there doing what they can. The demons millions of minions may be delusional, defrauded, naive, it really doesn't matter but they are not going to change their stripes and suddenly be our friends once this all goes down. 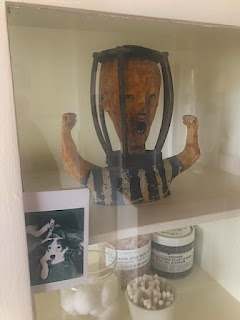 I'm hoping for a victory worthy of the gods. That is, one so convincing that they must cower back into their orc dungeons thus letting us breathe and heal, even just for a moment. Even in the event of resounding, unambiguous victory---say, a Biden win in NC, AZ, maybe not in FL or OH, but then PA, WI, and MI---there will be Trump and his cult. I'm sure the lawyers are ready. There's a piece in The Atlantic about how to deal with a coup, yes, a coup, which is real enough an idea that it's neither alarmist nor mere hand-wringing. You do have smoke alarms in your house, right? (We just spent a small fortune, deeply unsatisfying as an expense because a fire _really could_ happen as much as you do all you can to never need those alarms. Same deal (<---add Joe voice here for reassurance.)

The more the cult tries to intimidate and suppress the vote, the more resolute we must become that every vote is counted. There is no time to hesitate much less cower. I am heartened by the people standing in long lines who will not be stopped. Will young people actually show up in real numbers that make a difference? Never before has a party so shamelessly attempted to defeat democracy, which means they are certainly not done when they lose. The cult will not accept defeat because they cannot deal with truth in any honest way. If they do win then we know that America is a failed state and we'll each have to make choices about what is possible.

In yesterday's Saturday Conversaton I hammered some of the binaries that make demons demons and outlined how to avoid becoming the monster we can all become if we fail to fathom what's before us. We have the tools if we know how to use them. The tools are candor and innocence. The monsters are cynicism and corruption. The impediments to understanding the differences that make the most difference are false hope and untempered optimism.

Candor is not cynicism, it is the hedge, the way to truth. We must accept that truths too are incomplete and provisional, that they are all too human is what is sparing us the delusions of certainty and the kind of righteousness that makes certainty so dangerous. But we can sure enough. We can use facts and face the music. We need not give up on truth---we must not---because it's what we have and the demons know this too. That is, they know that our candor can be turned to cynicism and that is what they have chosen to do. Their own cynicism is delusional not because it lacks candor but because it indulges in the joys that cynicism provides: certainty, incontrovertibility, the self-righteous choice to claim superiority as an entitlement. Indulged cynicism brings many favors but none favor decency or truth.

Cynicism is not only defeating the idea that we _can_ keep it real and must, it is the choice to degrade and destroy that there is anything at all that stands behind your candor, that there _can_ be truth or facts (albeit human as they always are). Demons use candor for the purposes of cynicism to degrade our humanity, to cause us to choose demon over the human divines. There are no perfect, infallible, always correct, immune to cynicism gods. There are just human gods, which means deeply flawed but resistant to cynicism---and always still vulnerable.

Choosing not to indulge the cynical may not tell you who you want to be but that is for another day: it is there to tell you who you need not be, who you can choose not to be and sometimes that is enough or it will just have to do. Can we do better and more than that? Oh yes. But it will take more time and commitment. Choosing not to starve your inner monster is a way of creating the opportunity for more. The dragons in the dungeon can create a pause in the plot line and where that plot line goes depends on what you do with the demons inside yourself. We all have them.

Staying human-divine is no small matter. There are no god-gods, no divine divines, just human gods and human divines---that means there's always imperfection, flaw, vulnerability, and possibilities for better and worse. We aren't wholly in control of these matters because demons are the first to tell you that you can be the master of the universe and master yourself. Don't buy it: the world makes you in far less commanding formats of self.

But the demons do have a point: the world taken seriously (use your candor) is a very, very dispiriting, rough ride filled with hypocrisy and failed ideals. Your ideals and aspirations and values, which are never going to be perfectly realized, are nonetheless worth having. That does not require faith in the sense of someday my prince will come or there is going to be a heaven. Rather it is a matter of deciding for better, for more than cynicism when that is what is before you. Candor doesn't allow you to make fantasies more real than they are (and neither does it deny you a fantasy, which means you can still play air guitar in the mirror if that's your thing.)

The other requirement to fend off the monsters is to cultivate an innocence that nurtures sympathy and empathy. The presumption of innocence is more than some legal posture. It is the moral hedge against the certainty of guilt that we will otherwise project and use to advantage over the innocent. We must be vigilant not to corrupt the possibility that we could be wrong or that we need to be giving benefits and doubts their productive place. You see someone or something and no matter how "deserving" they might be of the plight they are suffering, you argue their innocence before guilt.

Optimism is false innocence. It is the fantasy that they are not only not guilty but couldn't be, or they didn't do it when candor demands the otherwise possible; they could indeed be guilty or are getting what's coming to them because they brought it on themselves. We need more innocence than optimism because it provides more honest inquiry. How big your nose looks today, grandmother; how big your teeth, says Red Riding Hood. Her innocence makes for query and doubt that empowers her to act. The wolf will do anything to eat you. (Apologies to real wolves.)

Optimism isn't required for innocence to keep away the demons. What we need is to put innocence in front of guilt, not to protect us from candor but also to protect us from giving up on decency. The monsters don't care about decency or sympathy, much less empathy: their selfishness, corruption, and graft tells them that the only truth is their personal experience. This is why some monsters alter their views when it happens to them or to the people _they_ care about: then "suddenly" they see that their personal experience confirms what could have been known with a dose of sympathy and the cultivation of empathy. Alas, don't count on the demons to be less demoniacal. Chances are they will be more selfish and as corrupt than you think is possible precisely because you can't imagine that, because you're _not_ that demonic.

What the gods know is that the demons are far, far worse than your imaginings, that monsters are real, don't become one and if you think you can't become one that is no guarantee you won't. Demons are radicalized gods or at least once they were because they all started out as human. There are no gods or demons that aren't human though humanity can be forgotten, hollowed out, forsaken, and corrupted beyond reclamation in this current birth. Evil becomes real when there is no reason to think otherwise, no evidence to mitigate, no innocence left to retrieve.
What it takes to be human only begins when we know that we can fend off the monsters. We can defeat them but they will come back. We can not become them even in our efforts to defeat them and in gaining the power that we need not to grant them power. Not becoming the monster is something we really can do but it takes some understanding and practice. We have to practice not being monsters and understand what it means to be one. No small task given it can turn us into what we need not become. We can become more human divines but again, that will take some time because it demands we integrate shadows---another topic entirely.

The understandings we need defeat cynicism and wage innocence, refuse the war once the battle is won. To become better, this is just the start. We are only at the very beginnings of what we call yoga and greatness, the mahā, is still over the horizon. That greatness is possible but only when we understand that the demons are real. More soon. Because there is always more.
Posted by dbrk at 8:57 AM